Maroon leadership and writers alike must be more thoughtful and sensitive in our reporting in order to repair relationships with communities of color on campus. 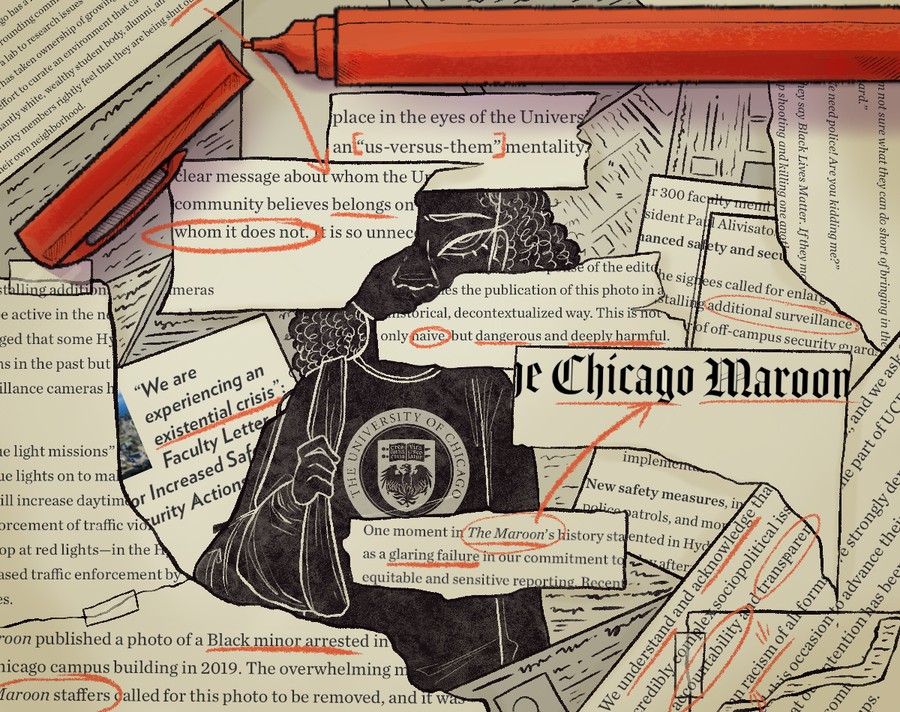 When my peers find out I’m a columnist for The Maroon, I’m either met with praise or subjected to a rant about how they absolutely hate the newspaper. When faced with the latter scenario, I don’t engage because I assume that the issue is not with me, but rather with the columnists who wrote the content with which they disagreed, and with the editors for allowing the content to be posted. Consequently, I choose to separate myself from any form of negative comments made about The Maroon despite writing for it. However, back in April, while in a meeting for a publication for which I was planning on writing, a member called it the only anti-racist student-run publication on campus. I then thought to myself: “Is The Maroon not anti-racist?” As a person of color, how do I reconcile myself with writing for a student newspaper that has been considered to lack racial sensitivity? It goes without saying that an extreme distaste for The Maroon exists; and, after some minor digging, I cannot blame these critics. Given The Maroon’s harmful depictions of people of color and multicultural organizations, Maroon leadership and Maroon writers alike must amend relationships with students of color and change the way they represent cultural organizations.

In February 2019, The Maroon published a photo of a Black teenager without his consent. The photo showed the youth being apprehended by a Chicago Police Department officer. A petition calling for the editors-in-chief to take this photo down quickly garnered more than 700 signatures. The petition stated that the publication of the image was “gratuitous, unprofessional, and deeply problematic,” perpetrating “the Myth of Black Criminality and the racist, distorted view of Black youth as less innocent [and] more adult-like and dangerous than their White peers.” I agree. It was a completely inappropriate photo that The Maroon’s past editors should’ve never allowed to be posted. To make matters worse, section editors were not consulted before the photo was published, and the photographer asked for the photo to be taken down multiple times. In the aftermath, many section editors penned an open letter to Maroon leadership and refused to work until the editors-in-chief left. This shows that unilateral decisions undertaken by top Maroon leadership deeply devastate not only its surrounding community but its own team as well. Another case of misrepresentation occurred in February 2020, when UChicago United (UCU), a coalition of multicultural organizations that works to make campus more inclusive for marginalized, posted a statement on how The Maroon had inaccurately represented it. In this statement, UCU said that the coalition would be “re-evaluating” the way it interacted with the newspaper after an article misstated its mission objectives and decontextualized the words of its representatives. In another recent case of The Maroon platforming harmful comments about a student organization, a Viewpoints columnist called for the Chinese Students and Scholars Association (CSSA) to be investigated for ties to the Chinese Communist Party. Not only did this article have Sinophobic undertones, but it vilified a student organization for having ties to its native country, failing to recognize that people are different from their country’s government. It didn’t take me long to find a few of many possible examples of The Maroon engaging in harmful behavior toward the people of color in its community.

Of course, folks on the The Maroon may not have had any malicious intent when publishing the latter content, but there needs to be more thoughtfulness and sensitivity when discussing racialized issues. This past April, the Maroon Editorial Board published an editorial series titled “How The University of Chicago Can Better Serve the South Side,” which recognized past harm, announced changes in The Maroon’s reporting standards, and provided a meaningful start to conversations about institutional changes within the University as a whole. This was a step in the right direction because, as a writer of color for The Maroon, it is upsetting to see how The Maroon has wronged students of color and its own writers of color by publishing problematic content in the past. As student journalists, we cannot be detached from what we write because our content does not exist in a vacuum. When we misconstrue vital information, even if we do not intend to do so, we negatively affect the students for whom we are supposed to provide news and content. The Maroon needs to be a space where students of color can feel like they aren’t being demonized, but we have not been particularly successful in this endeavor.

Moving forward, I wonder how The Maroon should best interact with students on campus and the surrounding community. As much as I try to make my columns about on-campus issues, this is not enough; as much as I try to be knowledgeable about issues on campus, I’m not always going to know what’s going on. For starters, as a columnist, I would like to see ideas flowing in from other students on campus rather than our own little bubble of columnists. Maroon leadership should be focused on making the publication more accessible to multicultural organizations so that they can bring up issues they want covered. In addition, before publishing something with a student’s or organization’s name attached to it, we should allow them to see what we’re going to quote so that they can see if it’s correct and not us misconstruing their words—anything we print is public information, after all. We should be giving these students the space and opportunity to share their goals with us in a manner that is not distorted and is faithful to their overall mission.

While The Maroon is a student-run publication, I find myself wondering how much we actually engage with the Hyde Park community in a constructive manner. I more than understand needing to publish articles consistently on tight deadlines, but the Viewpoints section shouldn’t just be focused on publishing for the sake of having something to publish. Viewpoints writers should also think long-term about how to make lasting, transformative change within our community; for instance, a columnist recently raised concerns about how the new Lululemon shop on East 53rd Street contributes to an ongoing cycle of gentrification in the Hyde Park area. Articles like these are crucial because they cause students on campus to reflect on their own actions and can, consequently, serve as mechanisms for instituting change within our community. I believe that our role as writers for a student publication is to advocate for change while also being as accurate as possible in reporting or discussing on-campus issues. When we misrepresent multicultural organizations or people of color in our reporting, there is going to be mistrust. When this happens, we fail in our mission to be objective and report on the truth. As an individual who believes in the power of journalism to be a seed of change, I believe that Maroon leadership and writers can be more conscientious and considerate when illustrating the communities of which we are a part.

Jennifer Rivera is a third-year in the College.