"I Thought I Was Endangering National Security,” Former Secretary of Defense James Mattis Said of His Decision to Resign 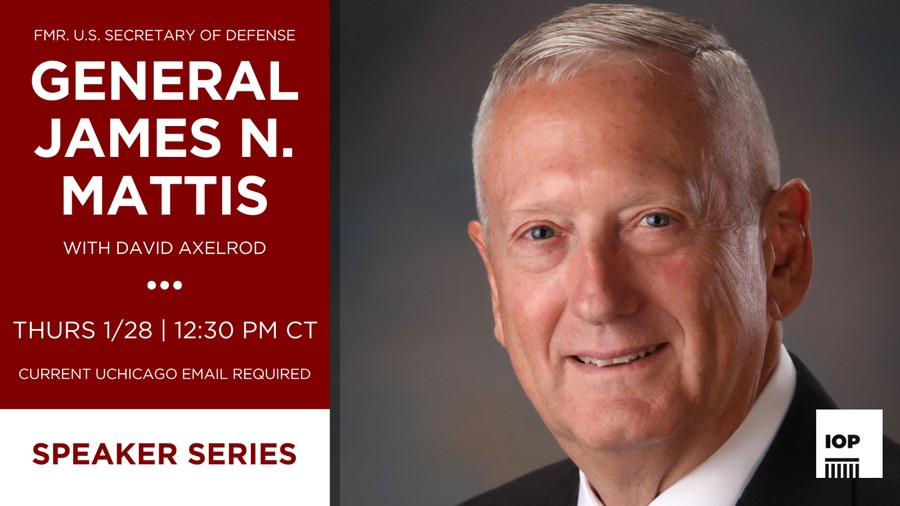 Former Secretary of Defense James Mattis spoke at the IOP on January 28th.

Former U.S. Secretary of Defense James Mattis spoke about how education currently promotes disunity in America, why the military’s problems are a microcosm of society’s, and why he left the Trump administration at an Institute of Politics (IOP) webinar hosted by IOP Executive Director David Axelrod last Thursday.

After he retired as a four-star general in 2013, Mattis said that he strived to live by World War II general Omar Bradley’s words. “When you retire your uniform, you should retire your tongue when it comes to any kind of partisan political statements,” Mattis said.

Taking this desire to avoid politics to heart, Mattis did not meet former President Donald Trump until he was called to interview for the position of Secretary of Defense in 2016. Two years after becoming the Secretary of Defense, however, Mattis resigned because of his belief that the Trump Administration did not internalize yet another clear lesson from history: that countries with allies thrive and those without die.

“There came a point when I was no longer enabling the security of the country—I thought I was endangering it,” he said. Mattis spoke about how progress on many social issues requires strong, nonantagonistic alliances, and that the goal of demonstrating American “reliability as a security power” had been harmed under the Trump Administration.

The fraying of American bonds is not limited to the United States’ international relationships, Mattis said. In 2017, Mattis stated that the most significant threat to the United States was disunity among Americans. Asked about where the U.S. is now on that issue, particularly in light of the recent Capitol riots last month, Mattis reiterated the words of an article written by former Secretary of State Madeleine Albright several weeks ago: “The two most dangerous words in the human vocabulary [are] ‘us’ and ‘them.’”

He also said that in order to address disunity, the U.S. needs to educate children about national history with a more positive lens.

“As I look at the way we teach history today, all the way from elementary through graduate level, I wouldn't have much affection for America, the way it’s taught,” he said. “And I'm worried that if we don't teach people the good, as well as the bad and the ugly, there is no mental model for how we bring this back together.”

Mattis also commented on the fact that some of the people who participated in the Capitol insurrection had military training, explaining that issues that show up in the military are a microcosm of societal problems.

“The military services recruit from American society. So, if we think we can recruit from a society with, for example, sexual harassment, and not have it show up in the military, then [we’re] living in a dream world,” he said.

Mattis further spoke about how the military can avoid, as much as possible, falling into those societal problems.

“It's going to take training, education, accountability, all the way through. And I'd make certain that people who think [they] can opt out of the military and then be shocked and outraged that people without [their] values are represented there need to look in the mirror for part of the solution,” Mattis said.

Mattis also said that patriotism during a time of increased partisanship means striving for a better society. “Defending this country and its freedoms, so long as you use those freedoms to make this country a little better, a little fairer, is worth it,” he said.