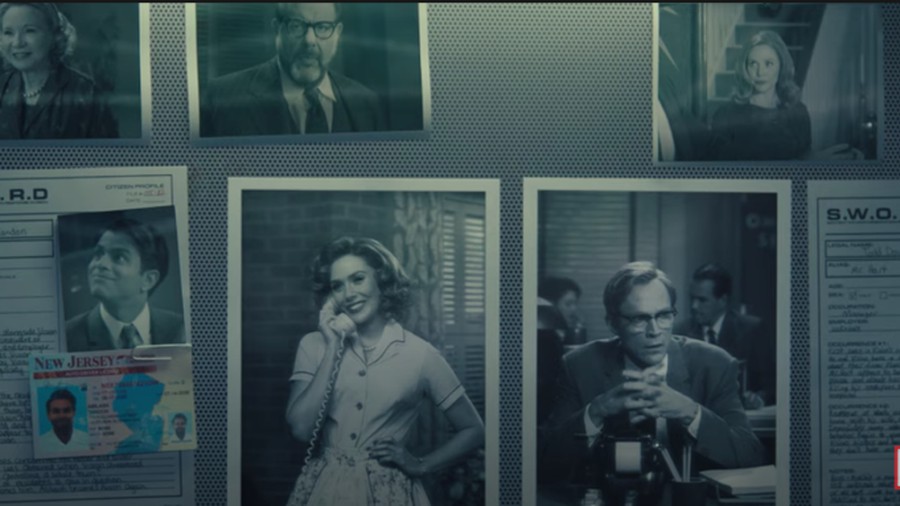 Since I last wrote about WandaVision, I’ve watched three episodes about an über-powerful entity creating a series of predictable, formulaic stories starring a couple of superheroes. Marvel (and Disney) seem to not recognize the inherent irony of making this entity the villain. WandaVision has yet to surprise me, and as far as I can tell, it won’t. I submitted my review of the initial three episodes on the Friday the fourth one was released; had I written about the fourth in that piece, I would’ve omitted the hope for a surprise.

The fourth episode abandons the sitcom for the police procedural, taking place outside Wanda (Elizabeth Olsen) and Vision’s (Paul Bettany) constructed world. Side characters from other Marvel movies come in and…it doesn’t matter. The show is being broadcast in-universe, an actualization of Wanda’s domestic fantasy with her deceased robot husband; that’s the big takeaway. The fifth and sixth episodes continue the series’ evolution of style, giving us the ’80s and the early 2000s and ultimately, nothing of real consequence.

If you like Marvel movies, you’ll like WandaVision. It’s a bland, predictable show, set within a universe of bland, predictable movies The fact that I expected something else is a testament to the quality of the show’s promotional campaign. There is no adventure in WandaVision. Instead of “a visionary new age of television,” the viewer is left with a big set-up for Eternals or Doctor Strange in the Multiverse of Madness or something yet to be announced.

The merits of the show remain unchanged from my initial review. Kathryn Hahn is never not fun to watch, Elizabeth Olsen turns in an impressive performance every week, and Paul Bettany is impressive despite remaining trapped beneath pounds of bright red makeup. Other characters come and go in the world outside Westview, but their appearances are the dullest parts of any given episode. What else is there to say? An Important character showed up in the fifth  episode but he is Important for reasons commercial rather than artistic.

At the end of the day, it seems that WandaVision will wind up being the worst possible version of itself. The behemoth making unoriginal stories might take some licks but will emerge a hero when all is said and done. The potential for artistic risk will go unrealized, and we’ll prepare ourselves for a new series of movies about heroes saving the world/galaxy/universe from a massive CGI threat. Again, I could be wrong. Now, I have less hope to lose and more respect to gain.

WandaVision is now streaming on Disney+, with new episodes every Friday. Check this space later for a review of the final arc of WandaVision.

What is “WandaVision,” If Not MCU-Commercialism Persevering?

Although "WandaVision" has its moments, it ultimately falls well short of being the heralded “visionary new age of television.”