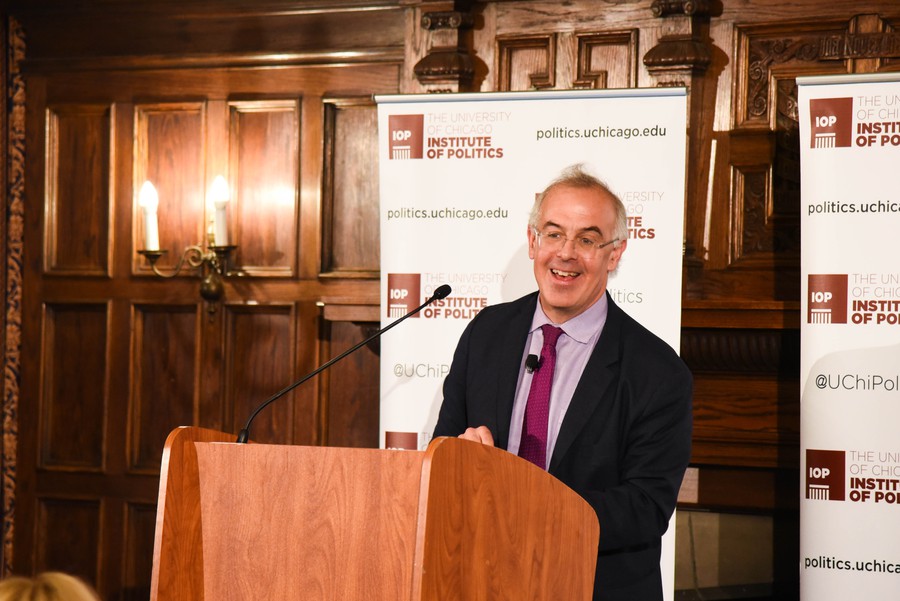 The New York Times announced on Saturday that columnist David Brooks has resigned from his paid position at the Aspen Institute.

Brooks (A.B. ’83) has been receiving a salary since 2018 from the Weave Project, which is funded by Facebook and other donors, BuzzFeed News reports. Brooks did not disclose this to readers of his New York Times columns, some of which promote the project and its donors.

Brooks has had a longstanding relationship with the University as an alumnus. He was elected to the Board of Trustees in 2012, and he served on the Board of Advisors of the Institute of Politics (IOP) from 2013 until 2018. Brooks spoke at the inaugural Class Day in 2017, the first year in which that event replaced the traditional Baccalaureate Ceremony, and at an IOP event in 2018. As an undergraduate at the University in the 1980s, Brooks was a columnist and editor on The Maroon’s Viewpoints pages.

Brooks has been employed by the Aspen Institute, a Washington, D.C., think tank and nonprofit, since 2018 as the chair of Weave: The Social Fabric Project, which Aspen describes as “a cultural movement renewing America’s social fabric.” The Aspen Institute did not disclose how much Brooks is paid but confirmed to BuzzFeed News that “as chair of the Weave project, he is a staff member at the Aspen Institute.”

The Times has already added disclosures to Brooks’ past columns mentioning Weave and will continue to do so in the future.

The Aspen Institute’s 2018 financial report shows that Weave received $1.3 million from private and corporate donors, including $300,000 from Miguel Bezos (father of Amazon founder Jeff Bezos) and an undisclosed $250,000 from Facebook, as well as contributions from the Resnick Family Foundation, the Robert K. Steel Family Foundation, and Aspen Institute trustee James Crown (LL.D. ’11). Crown was the chair of the Board of Trustees of the University from 2003 to 2009.

The revelation of Brooks’ second salary adds to questions raised recently regarding possible conflicts of interest in the columnist’s writing. Last month, Brooks penned a post for Facebook’s corporate blog promoting a study on Facebook groups funded by the company itself. In a statement to BuzzFeed News, Murphy commented that Brooks did not make his editors aware of his guest posts for Facebook.

While Brooks’ involvement with Weave is well known (he first wrote about it for the Times in 2019), he failed to disclose it to his readers as a source of personal income. The Times did not tell BuzzFeed whether it was previously aware of Brooks’ second salary.

On March 5, Brooks appeared on PBS NewsHour. When asked if he was rethinking his decision not to disclose this funding relationship, Brooks refuted the allegation that he failed to disclose his relationship with Facebook.

“We did totally disclose it. Everything has been public,” he said. “First, the Times completely was informed when I started Weave [as to] what it was going to be and how I was going to get compensated by Aspen. Second, the Aspen Institute is completely transparent about who the donors are, and so we released the donors. Third, since I started Weave in 2018, I have not meaningfully written about any organization or individual who has supported us, including Facebook… Fourth, I do understand the concerns, and…I want to be beyond question, and so we’re going to make some changes.”

Further reporting by BuzzFeed News revealed that donors to Weave included the social network Nextdoor and the Walton Family Foundation, both of which Brooks has promoted this year.