For Your Eyes Only: The First Event in the Chicago Humanities Festival’s "Deep Dive: Speech" Series 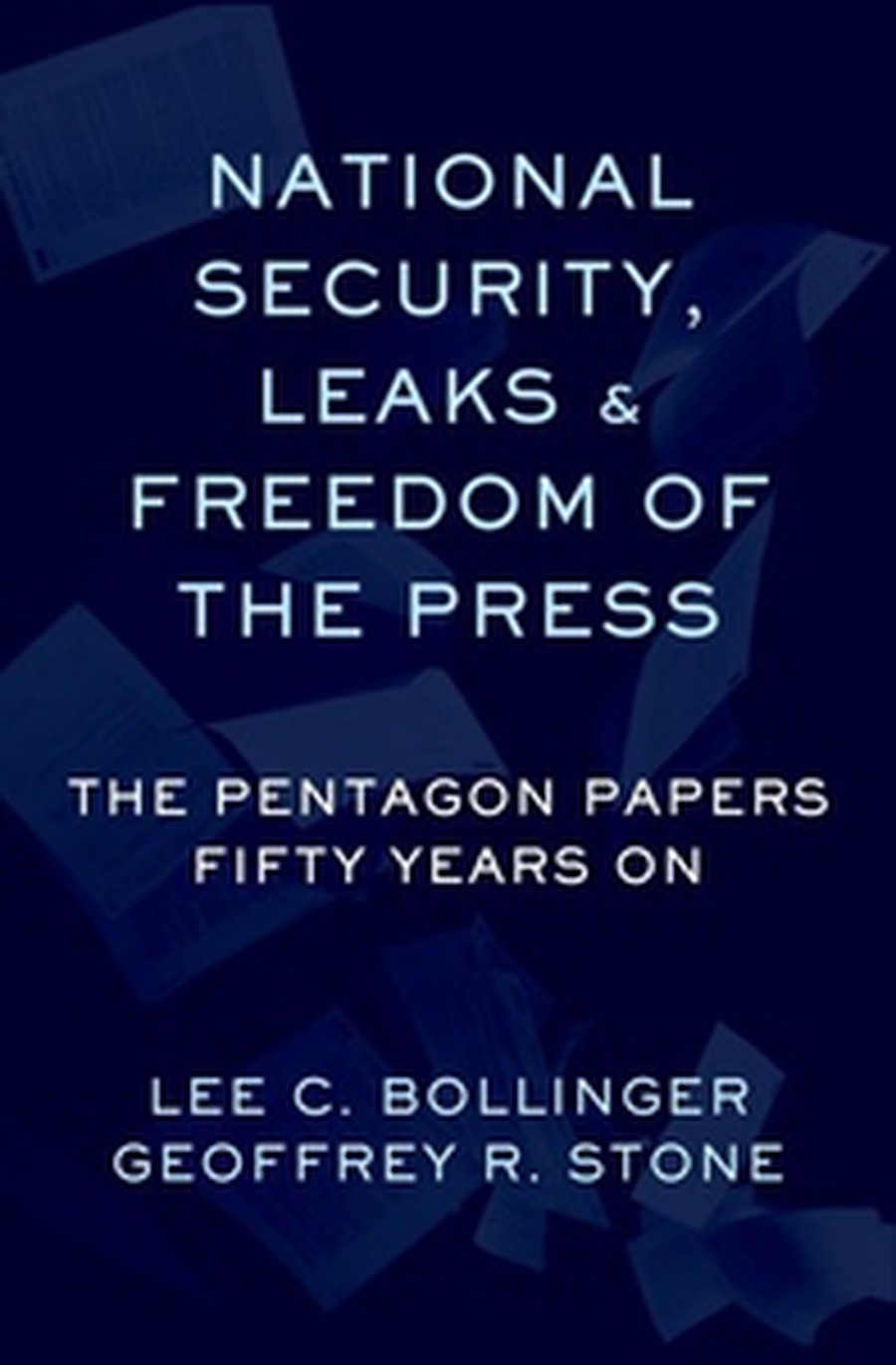 All three participants of the seminar were contributors to the recently published "National Security, Leaks, and Freedom of the Press."

“One of the most vexing questions facing any democracy is how to balance the government’s need to conduct some of its operations, especially those related to national security, in secret with the public’s right to know what its government is doing.” With this remark, Geoffrey Stone, a professor at the University of Chicago’s law school, began a presentation on March 30, the first of three in the Deep Dive: Speech series, organized by the Chicago Humanities Festival. He was joined by Ellen Nakashima, national security reporter for The Washington Post, and John Brennan, former director of the CIA, both of whom were among the contributors to the recently published book National Security, Leaks, and Freedom of the Press, on which Stone and Columbia University President Lee Bollinger collaborated. The book is an effort to take the measure of the current state of affairs and comprises interviews with and writings by numerous national security experts, of varied professions and outlooks.

“The answer begins,” Stone continued, “with the Supreme Court’s landmark 1971 decision in the Pentagon Papers case.” Daniel Ellsberg, a government employee, had photocopied several thousand pages of classified documents documenting the history of American involvement in Vietnam and the surrounding region. After redacting sections that he believed would harm national interest if disclosed, Ellsberg gave the photocopies to The New York Times, which then published excerpts. Various branches of the federal government sought injunctions against the newspapers and to charge Ellsberg with treason. The cases were combined and taken to the Supreme Court, and, in what Stone called “a stunning decision,” the Court ruled that because the government had failed to establish proof of “grave, immediate, and irreparable harm to the nation,” the newspapers could continue to publish the materials, even though they had been obtained illegally.

This decision determined that government employees who release (or leak) classified documents are subject to prosecution, but that the publishers of such material will not suffer legal action. The government is under no obligation to release classified documents, even if many officials involved in those matters believe so. The standards established by this case, Stone said, have worked “reasonably well” for most of the time since.

With the advent of the internet, digitization of information, expansion of powers of publication (from a few newspapers to nearly anyone with an internet connection), and a tremendous increase in the number of government employees with security clearance (and thus an attendant increased likelihood of leaks), issues that had been uneasily settled have become newly, and resurgently, unsettled. “Today, leakers like Chelsea Manning and Edward Snowden have the digital capacity to disclose tens of thousands of times the amount of information leakers could realistically have disclosed in the past,” Stone said. Where the Pentagon Papers decision rested on a presumption of responsibility on the part of a professional press, Stone said that “social media has trashed the notion that such publishers of information can be trusted to be responsible.” As such, the risks for too much secrecy and too much disclosure are quite different from those of the Pentagon Papers era.

Nakashima (who stressed that the views she expressed were her own and are not representative of any stance on the part of The Washington Post) began by describing the case of Edward Snowden. “So picture this, it’s the summer of 2013,” she said. “My colleagues Bart Gellman and Greg Miller are sitting in a conference room, facing more than a dozen stone-faced analysts and officers,” from various American intelligence agencies, discussing the so-called black budget, an account of the government’s spending on its many intelligence operations. These were among the many documents disseminated by Snowden. Those stone-faced government employees and representatives of The Washington Post found themselves at odds, a tension that Nakashima said is good in any democracy. Ultimately, Nakashima said, the newspaper published selections from the material, but only after ensuring that “the stories that did emerge were as fair and accurate as possible, and that harm to national security was minimized.” This due diligence entailed a rigorous protocol ensuring the security of the information itself as well as that of the many people doing national security work. Nakashima’s essay in Stone and Bollinger’s book describes in detail how The Washington Post handled receipt, safeguarding, selection, and publication of the Snowden documents.

John Brennan first complimented Nakashima and the others at The Washington Post for “doing a very good job of handling” the Snowden disclosure, “which was an exceptionally sensitive matter.” He stated that “there has been far too much classification of information in the U.S. government,” resulting from the accrual of many “legacy practices” that tend toward more rather than less classification. There has also been an enormous increase in the amount of information, a trend that began with the response to 9/11 and accelerated with technological developments that allowed for greater collection and storage of data. There is also, Brennan said, a “tremendous sense of insularity” among those in intelligence work, who “live in a secret world,” the exposure of which could cause grave harm to the United States and to those working in intelligence around the world, who could be “incarcerated and even executed” if their secrecy is compromised. “There really are life and death issues associated with a lot of this information,” Brennan said. He expressed respect for publications such as The New York Times and The Washington Post, which he said have a history of responsibly handling the publication of unauthorized disclosures from the Pentagon Papers to the present day. “The real risk,” he continued, is with “individuals who pretend [to be] or present themselves as journalists” and are unconcerned with the consequences. “Having been involved in intelligence and counterintelligence for many years,” Brennan said, “our global adversaries are certainly not opposed to using the guise of journalism to uncover national security information.”

Stone then posed one possibility to his interlocutors, that “the right the Pentagon Papers decision gave to the press to publish national security information is going to be available only to the New York Times, The Washington Post, and The Wall Street Journal” and that any other entity publishing national security information is committing a crime. Nakashima said that such a reading of the decision would be hard to justify, especially because it fails to account for platforms like WikiLeaks, which are difficult to classify. Brennan concurred, pointing out that the question is really how to determine what constitutes legitimate journalism and which people claiming that label should be afforded the profession’s legal protections. Brennan cited Edward Snowden, for “absconding with the material” and then disclosing it to foreign intelligence services, as a reason for distinguishing between “that which individuals do because they have honorable intentions and that which is done either to cause a splash or harm national security.” Stone agreed, posing questions about how—through licensing as with radio and television—there might be a publishing environment that makes it more likely than not that people trying to disseminate classified information will go to an established, responsible outlet rather than put everything on social media.

Stone then posed another possibility: that government employees be protected under the First Amendment to disclose classified information, an approach that would substantially increase the number of leaks. Would this be one way to counteract the tendency to excessive classification that Brennan described earlier? “There are leaks and there are leaks,” Nakashima said. “There are probably tens of dozens of leaks that happen every day” on minor matters such as dates of classified meetings. Then there are the “more programmatic ones”—for example, Nakashima cited the terrorist surveillance programs post 9/11 that the The New York Times had broken in December 2015. She averred that it would probably have been better if such programs had been subject to greater review by legislative and judicial bodies. Nakashima returned to the case of Edward Snowden, whose disclosure revealed the National Security Agency (NSA)’s collection of telephone metadata under section 215 of the Patriot Act. Greater debate about such programs before their implementation would, she said, “relieve some of the pressure that builds up over the years” and leads to potentially harmful leaks. Brennan agreed with the call for thorough reviews on a regular basis, recalling his assessment of the programs described in the Snowden disclosure, many of which “carry over from one administration to the next” without any review, as overdue for such scrutiny. “I’m not in any way saying that what Snowden did was appropriate,” he said, but that it precipitated “a necessary if belated review of some of these programs that really required a paring back.” When Stone asked whether there are protocols for government employees to raise objections to or request reviews of programs, Brennan affirmed that there are but that “the question is whether they are sufficient.” Such motions are unlikely to have the immediate effect of a public disclosure, a possibility Brennan said was “an uphill battle” during the Trump administration.

The collocutors went on to discuss Julian Assange and WikiLeaks. Nakashima expressed concern about the prosecution of Julian Assange in that it may “set the precedent for prosecuting an individual conducting acts that very much resemble news gathering.” Brennan responded that because Assange “guided and directed individuals within the government to violate their oaths of office and commit crimes,” his active role as instigator rather than a passive role as recipient complicates claims of journalistic probity. Nakashima then remarked that if the government’s prosecution of Assange had been limited to charges of conspiracy to hack and of soliciting and encouraging people, notably Chelsea (formerly Bradley) Manning, to acquire classified material on his behalf, then she would view the matter differently.

Despite the importance of the topic and the expertise of the speakers on the panel, the purpose of the talk was unclear. Any listeners unfamiliar with the cases of Assange, Manning, and Snowden would have had to do additional research to understand the presentation, and yet the discussion never went into details that would have been new for those already so informed. There was general agreement on the need for better review processes and a less aggressive tendency toward overclassification, which ought to have prompted some discussion on specific policies. This never happened. Given Brennan’s allusion to America’s foes around the world, it would have been informative to hear more about which factions and states he considered the greatest threats. This would have been particularly helpful in making sense of the convoluted Russian involvement in WikiLeaks and Assange’s and Snowden’s public dealings with that nation. With the information in Manning’s and Snowden’s disclosures now being widely disseminated, if not widely understood, an analysis of the repercussions of these leaks seemed conspicuous in its absence. Surely now that the materials have been published and caused whatever damage they did, a reckoning of that damage would have helped attendees understand what’s at stake and what changes those leaks wrought. Any attendees who, having some vague notions about Russia and hacks and election interference and other topics of national security, would have come out from the presentation having gained little in their understanding.