Meditations on the One Dollar Tomato Slice 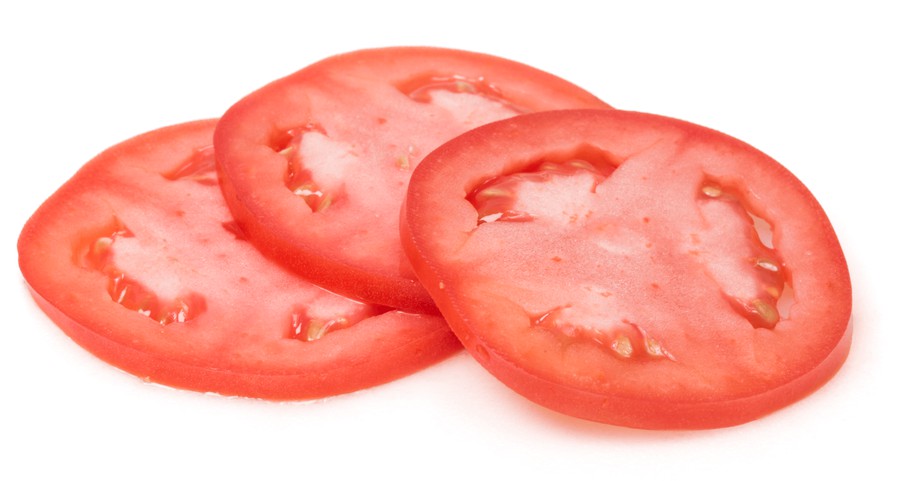 But what is a tomato slice?

Two weeks ago, while ordering dinner for a few friends, I landed upon an oddity. Maybe it wasn’t actually odd, but I wanted to believe it was odd. When things are a skosh off-kilter, it’s natural to hope they’re truly off-kilter and not just an accident.

The 57th Street restaurant Medici (colloquially, The Med), with its rotating wooden statue, fresh-baked bread, and mega milkshakes, offers a side of tomato for a dollar. What does this mean? Immediately, I wanted to assume the most satisfying prospect: the Med indeed sells a singular tomato slice for a whole dollar and calls it a side dish. Shortly thereafter, though, doubt crept in.

No, no, I said to myself, don’t be absurd, they would never. This must be an accident, I thought; it has to be a mistake. Or perhaps it was a real side, a salted tomato slice, diced tomatoes—something, anything that would qualify its price of an even dollar. After all, the side sauces are free, so why charge a dollar for a “side-dish” tomato slice?

I had to try it. I had to know. I had to speak to someone. There were too many questions, questions that reached beyond the tomato itself. Does The Med sell the slices separately? Would it look silly if I ordered one? How do they package them to-go? What’s their tomato source? What’s their profit margin?

I had no choice—it was tomato time.

Ordered online. Not yet confident enough of the item’s existence to order in-person. The Med’s Chownow interface has a minimum order price of three dollars, so three tomato slices are on their way. I’ve procured a ruler and gram-based scale for the occasion. Measurements must be precise so as not to misunderstand the phenomenon. Secretly, I’m hoping for a green tomato. Have you seen the movie Fried Green Tomatoes? If not, go watch it now. You won’t be sorry. Seriously, stop reading this and go watch. I’m going to turn it on right now. Back soon.

God, what a film.

The first thing one notices upon receiving a one-dollar Med tomato slice is that it is just that: a tomato slice.

The second thing one notices upon receiving a one-dollar Med tomato slice is that it comes packaged like a child’s toy, which is to say in a manner needlessly abundant. In a bag the size of my computer there are three smaller boxes, each containing a single slice of tomato. Why have they been packaged separately? Why, further, have they been packaged in a foldable cardboard box sized to hold a small salad, plus a cup of dressing on the side?

The third thing one notices upon receiving a one-dollar Med tomato slice is that it is, in fact, two tomato slices stacked atop one another. At first, I thought this was a fluke, but each of my three boxes cradled two slices. The question now is whether the Med threw in extra tomatoes to a customer ordering thrice over. Listen, I’m an English major. Words and their specific, contextual usages are the foundation upon which I’ve staked the financial status of my future self and dependents. I want you to consider this, fresh from the online order form:

As you’ll notice, the item is in the singular.

This is all too much. I need to excuse myself.

If I’m honest I’m all the more impressed given the circumstances under which I ate them. I ordered them yesterday and picked them up after class. It wasn't really lunchtime, wasn't even vaguely lunchtime, and I'd had a whopping, un-tomatoed sandwich a mere two hours before. What I mean to say is that I retrieved my tomato bag, and promptly forgot about it. For a day. Left them to stew in the elements of my basement apartment.

When I woke this morning, I panicked, snatched the bag, and plopped it in the fridge.

A few hours thereafter, they were cold and refreshed. I withdrew one of those signature cardboard side salad boxes from the fridge and cracked it open. I screamed, my roommates emerged. I showed them the box: there were two slices.

With as much surgical precision as an English major can muster, I lifted but one of the two slices with a fork. Slicing it into fourths, I tested the first piece without any additional flavor—no salt, no pepper, alone. This was tomato a la carte, tomato-flavored tomato. It was fabulous. The second piece, with salt, fabulous. The third, with pepper, also fabulous. The fourth, on a sandwich, was complementary without being overpowering. The slice size is calculated just so, not obstructing one’s bite access to lettuce, onion, bread, or (fake) deli meat. Slices five and six were consumed later that same night, paired with a veggie burger on a pretzel bun. They soaked up the pretzel saltiness without stealing it, left enough juice to moisten the toasted bun, and added a cool contrast.

I’m impressed. But why? Is it that I expect excellence given the dollar-context, the careful mode of delivery? Is it because these tomatoes are that good?

The Med buys their tomatoes wholesale or uses Hyde Park Produce (HPP), according to a brief phone call I had with their staff. HPP would be more expensive per tomato, so for a conservative estimate of The Med’s profit margins, let’s use this value.

Today, the vine-tomato price at HPP was $0.99/pound. The average medium-sized tomato weighs approximately 110g. If we round, there are 454g in a pound. Therefore, there are—roughly—4 tomatoes in a pound, which makes each tomato about $0.25.

The average diameter of a medium tomato is 60mm. The tomato slices I received in my side order were remarkably consistent and measured about 6mm apiece, there being two in each box. So, assuming this consistency is, well, consistent, then there are approximately ten tomato slices per tomato. Now, I never received the butt or stem of a tomato, so let's assume that The Med's quality control has eliminated the use of tomato-ends, cutting out two of every ten slices per tomato and leaving us with eight. Therefore, The Med can reasonably expect four sides of tomato per single, whole tomato-unit, and 16 sides of tomato for every dollar spent on raw ingredients.

If the Med is buying from HPP, then they earn four dollars plus tax and service fees for every quarter spent. Let’s assume for simplicity’s sake that those added fees cancel out pesky packaging overhead. We’re then left with a quarter spent and four dollars earned. To put this into massive perspective, the Medici side tomato represents a 1500% profit.

An economics major, a biology major, and a statistics minor walk into my kitchen. I have them each check my numbers independently, and they all confirm that yes, this profit margin is in fact correct. A sociology major follows on their heels, faints.

“Can I ask a silly question?” I venture into the phone. I’m giving the Med a ring; it’s about 4 pm, late enough after lunch that no one will be too hard-pressed with customers to be annoyed with my unorthodox order, early enough that dinner service won’t have started yet. I’m nervous: it’s one thing to click a “tomato slice” button on a screen, another altogether to request one vocally.

“Of course,” chimes the other end of the call.

“Your side of tomato—is that a side-side, like, is it a salad setup, a salted kind of thing, a super-secret Med recipe customers need to ask for, like the Animal Style menu at In-n-Out, like is it a special side, a special tomato, like a ketchup pudding, the kind of thing you get because it’s novel, and even after you’ve received it and can see for a fact that really, it’s nothing terribly out of the ordinary and you’ve only hyped yourself up in the hopes of something extraordinary coming your way because, God, you need something sort of extraordinary right now and maybe, you think, just maybe this is it, this is the one I’ve been waiting for, and so you bite, you call, you fork over some cash, and even after you see it’s your imagination that’s run wild and not the world running in a more interesting pattern, you can’t bear to believe it, and so you insist that no, no, this thing was extraordinary, it is, and you go on walking through your everyday with the staunchest conviction that you found and experienced something few others have? Or is it, like, just a tomato slice?” I ask.

The other side chuckles a little. “No, that’s just our guest garnish if people want extra.”

Oh. I try to hide my devastation. It’s silly, I know, I’ve already had the tomato side and here I am sad that what I know isn’t something different.

“I’ll take a strawberry milkshake with extra whipped cream for pickup then,” I exhale. “Thanks for answering my question, I know it was odd.”

“No problem at all, happy to help!” the voice says, kindly. “Is that all?”

“Sure you don’t want that tomato?” the voice chuckles a little.

And we both chuckle, right there for a second. Maybe this is that little slice of miraculous, the mystery that such an out-of-place and ambiguous menu item presented for me to solve. That’s what I’m paying for, that’s what I’ve been paying for this whole time.

Or maybe it was just a tomato slice.