A Slice of Life "In the Heights" 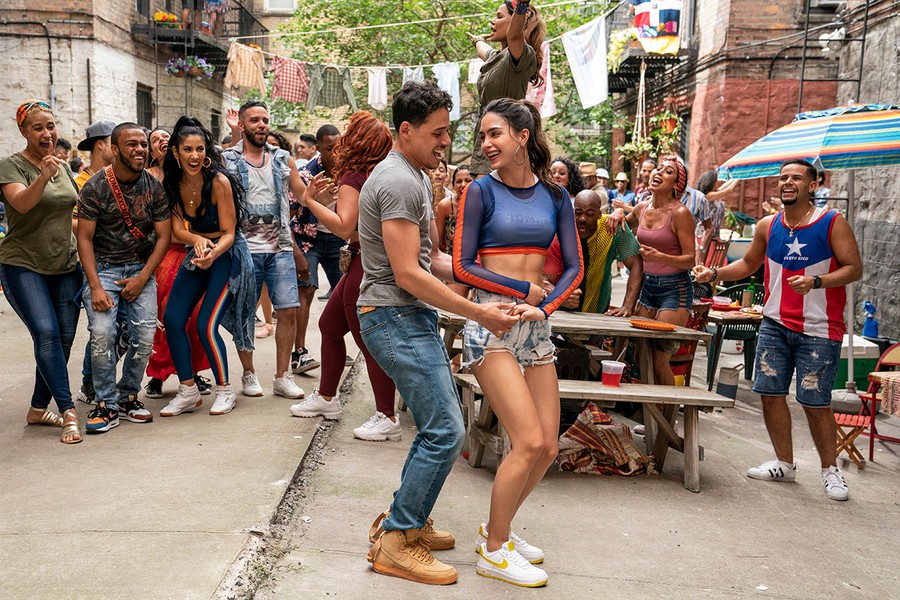 "In the Heights" is a must-watch summer blockbuster.

Let me preface this review of In the Heights by admitting that I haven’t seen Lin-Manuel Miranda’s original musical of the same name, but I am listening to the original Broadway cast recording as I write this and have spent copious hours browsing Wikipedia and watching bootleg “slime tutorials” on YouTube. Still, there’s always extra pressure in adapting a beloved intellectual property to the screen, especially given the cultural weight of In the Heights and what it represents to the Latine community. It’s similar to the buzz around Crazy Rich Asians two years ago (the two films even share the same director, Jon M. Chu) in that its success could define Hollywood’s treatment of non-White stories and stars for years to come.

So, it’s a relief to be able to say that I really enjoyed In the Heights. It’s a glossy, fun summer blockbuster that brings the upper Manhattan neighborhood of Washington Heights to life. Chu pulls no punches in showcasing the vibrancy and colors of the community, from an explosive poolside musical number (“96,000”) to an impromptu block party (“Carnaval del Barrio”). Nonetheless, it does eschew some realism—it’s tough to believe everyone in the neighborhood is as friendly as the film claims, or that life is as joyous as it’s packaged (the racial microaggressions Nina (Leslie Grace) experiences at Stanford are left as off-screen anecdotes).

The plot of In the Heights is fairly simple: local bodega owner Usnavi (Anthony Ramos) is conflicted over returning to the Dominican Republic and chasing his boyhood dreams of running his father’s restaurant. As he deliberates, so too does the rest of the neighborhood—their dreams, from fashion designer to salon owner to human rights lawyer, seem to be pulling them further and further from the primarily Puerto Rican and Dominican Washington Heights. The neighborhood’s residents are incredibly easy to love, elevated by a stellar cast. Standouts include Ramos, Grace (whose rendition of Nina’s “Breathe”, a song about falling short of impossibly lofty expectations, is an anthem for imposter syndrome and FGLI-student pressures), and Olga Merediz (reprising her Tony-nominated role as “Abuela” Claudia from the original Broadway cast). Miranda and Christopher Jackson, who starred as Usnavi and Benny in the Broadway run, also cameo in a hilarious rivalry as Mister Piragüero and Mister Softee, respectively.

The film focuses on scattered moments during a three-day blackout in Washington Heights. Rather than having an overarching villain or conflict, the moments are framed by a retrospective Usnavi, who acts as storyteller and guide to the audience. In interviews, Chu has stated that this slice-of-life approach stemmed from the fact that present-day Washington Heights has already been gentrified: the community must decide how to move on from a change that’s already happened. It’s an interesting and melancholic choice. In the Heights is less than 20 years from its original Broadway run, but the Washington Heights it envisions may have already disappeared for good.

While I appreciated the film’s nods to gentrification and its effects, it does call into question its ending. Usnavi ultimately decides to stay in the neighborhood and run the bodega—yet the film implies that the neighborhood he stayed for is gone. His love interest Vanessa (Melissa Barrera) also stays with him, backtracking on her aspirations of moving downtown to become a fashion designer. Rather than the hopeful note suggested in the original musical, the post-gentrification reality of Washington Heights shapes the film’s ending as a hidden tragedy, as Usnavi’s naïve idealization of the Dominican Republic is transferred to a vanished neighborhood.

Upbeat, cheery, and relentless, In the Heights is a brilliant summer blockbuster; however, it falters in trying to be anything more than that. There are references to DACA and the ongoing fight for undocumented immigrants in attempts to modernize from the original musical, but the film fails to dwell on them long enough for the audience to really care. Similarly, while the slice-of-life storytelling shines a spotlight on the community’s energy, it takes away some of the intimacy of its smaller stories. Romantic plotlines are reduced to the point of disbelief (if one of your romantic pairings has the songs “Sunrise” and “When the Sun Goes Down” dedicated to fleshing out their relationship, you kind of need to include both for the relationship to make sense), characters are written out of the story (RIP Nina’s mom, I’m sorry if they explained your backstory and I missed it), and a slightly saccharine product is left in their place.

Nowhere is this more evident than in the film’s depiction of “Abuela” Claudia. Despite Merediz’s brilliance, the film tells more than shows Claudia’s impact on her community. Her backstory song (“Paciencia Y Fe”), a striking and heart-wrenching look at the cost of the immigrant dream, is sung right before she passes away, and we’re left with Usnavi telling us how much she meant. She leaves Usnavi her winning lottery ticket, but the film doesn’t afford her an explanation for this, or why Usnavi was so important to her (“Hundreds of Stories” in the original musical).

Nonetheless, In the Heights wasn’t made to make audiences think about gentrification or the hidden cost of the American dream. It was to give the Latine community a chance to see themselves represented in a heartfelt and fun story, and the film more than delivers on that front. The soundtrack is unbelievably catchy and a clear love letter to the multiculturalism of Miranda’s Latino roots, the dance numbers are over-the-top spectacular, and the cinematography is stunning (“When the Sun Goes Down” features Nina and Benny (Corey Hawkins) dancing atop a window, Inception-style).

In the Heights will be released in theaters and on HBO Max June 11, but you’re doing both yourself and the film a disservice if you watch it on anything other than a massive screen (vaccinated and COVID-safe) while eating stale, overpriced popcorn.