Grappling with Injustice: The Future of Problematic Statues in Hyde Park 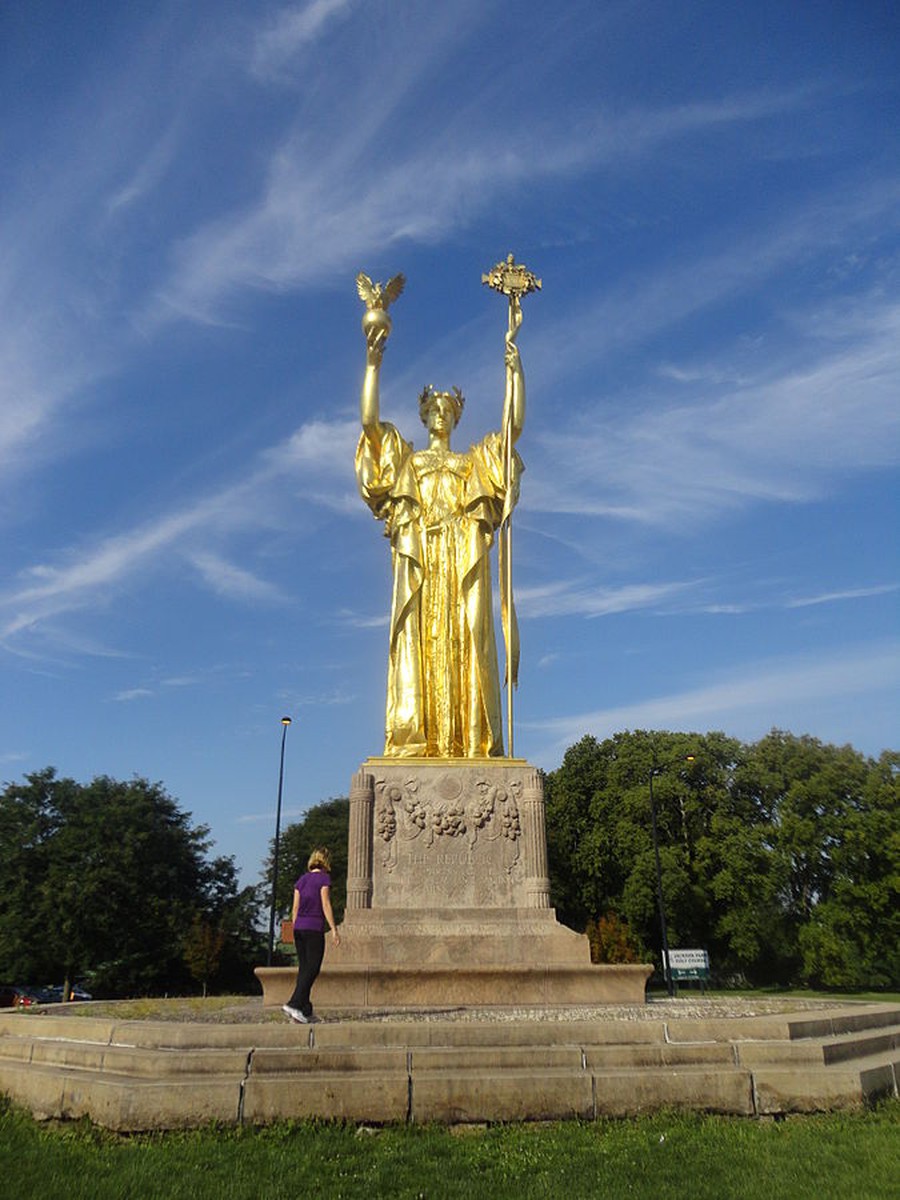 The statue of The Republic in Jackson Park has been flagged for review.

The murder of George Floyd by a Minneapolis police officer last summer sparked a nationwide reckoning over the history and legacy of racism in the United States. As Floyd’s murder was litigated, so too was American identity. And in many cases, discussion over historical statues and monuments took center stage.

Hyde Park has not been excluded from this national debate. In February, Chicago Mayor Lori Lightfoot’s administration marked 41 statues in the Chicago area under the Chicago Monuments Commission, including ones depicting Christopher Columbus, Abraham Lincoln, and George Washington, as being under review due to their likenesses’ controversial pasts. The commission did not explain why each individual statue was flagged, but it offered several key principles that guided the decision. Statues were selected if they glorified colonialism or slavery, depicted an enslaver, or presented inaccurate or problematic depictions of Native Americans, among other related reasons.

Two Hyde Park statues are on this list. The first is the statue of The Republic in Jackson Park, an iconic symbol of the 1893 Chicago World’s Fair. It depicts a woman crowned with a wreath and holding a bird and a staff. The 1893 World’s Fair was a celebration of the 400th anniversary of Christopher Columbus’s arrival in North America—a date that also marked the beginning of four centuries of dispossession and genocide of native peoples across the continent. Glorifying the subjugation of Indigenous peoples was in fact a selling point of the fair. One exhibit on the Midway Plaisance prominently featured exhibits of native people from across the world, labeled as “primitive” and put on display for the amusement of ogling, mostly white fairgoers.

Another statue marked for review near campus is the statue of George Washington in Washington Park. This statue depicts Washington riding a horse in full military dress while holding a sword toward the sky. The original version of this statue, which was placed in Paris, was commissioned by the Daughters of the American Revolution, an organization that has funded the erection of statues around the world to glorify their ancestors’ legacies and as a reaction to the civil rights movement of the 20th century.

Jack Spicer, the preservation committee chair for the Hyde Park Historical Society and a park historian, explained that Chicago’s parks fall into two main categories: formal, European-type parks with rigid paths, and naturalistic parks that are more “democratic” and allow people to go anywhere to view nature. Washington Park and Jackson Park, the homes of the statues that were flagged for review, fall into the more formal category. Spicer said that these statues were designed to command authority; often, this was authority that acted to preserve racist and rigid social hierarchies.

“​​[It’s] a particular kind of statue that we see over and over again in parks, and it doesn’t matter who that portrays; it’s the same message.” Spicer explained. He pointed to the Carl von Linné Monument, a statue on the Midway near Harper Library that depicts Swedish biologist Carl Linnaeus, as another example of this pattern. According to Spicer, Linnaeus made a “scientific” pyramid of life that put white European males on the top.

“Almost always when it’s a vertical kind of pure middle notion of authority, somebody is going to end up at the top that doesn’t necessarily belong there and at the expense of ‘the rest of us,’” Spicer said.

Indeed, the debate is not about statues themselves: It’s part of a broader examination of American identity. Many statues glorifying racist elements of the country’s past did not spring up by accident. Rather, they appeared as part of a concerted effort to craft a narrative about American history. Despite the legal end of slavery in the United States, the families of Confederate soldiers during Reconstruction and beyond wanted to preserve the Confederacy’s legacy by enshrining it through monuments.

This goal was entrenched in the concept of the Lost Cause, a narrative popularized in the 1890s that tried to paint the Confederacy in a different light. Proponents of this idea put forward the notions that the Civil War was not about slavery and that the Ku Klux Klan was trying to revive the heritage of the South. These ideas were the driving force behind organizations like the United Daughters of the Confederacy (UDC) that sought to solidify their version of history through building monuments.

The Sons of Confederate Veterans (SCV), an organization similar to the UDC, is still active. It is an all-male organization whose members have one or more ancestors who fought for the Confederacy.

Matthew Evans, a camp commander for his chapter of the SCV, argues that Confederate monuments were put up in the early 1900s and the 1960s not to intimidate Black Americans but instead simply to commemorate anniversaries of the Civil War. Evans framed the issue as a matter of family history.

“When Reconstruction ended and the turn of the century came, you had a lot of old veterans dying, and there weren’t a lot around to tell the stories of war. A lot of the families that lost cousins or relatives wanted to do something to remember their family, and they picked the courthouses,” Evans said.

But many people of color do not share Evans’s nostalgia for the 19th and 20th centuries—a time that, for the country’s Black and Indigenous populations, was characterized by brutality, indiscriminate violence, and terror.

Beacham said that he understood the impulse to mourn the loss of human life, even if it was lost for an unjust cause. Yet he staunchly believes that that the soldiers at Oak Woods were fighting to uphold white supremacy and that the people honoring the monument were attempting “to resurrect their fight,” a struggle that “should be kept in the grave.”

Besides just taking statues down, several monuments in cities around the country have been sent to museums. This is seen as a middle ground where they can still be viewed by people but not commemorated or celebrated. As of last September, about 35 monuments had been accepted by museums or sent to Confederate cemeteries nationwide.

Christine Mehring, a professor of art history in the College and an adjunct curator at the Smart Museum of Art, believes that it is important for participants in this debate to frame some of their thinking in a sociohistorical perspective.

In an email to The Maroon, Mehring explained that debates over the role of statues and monuments are often about something deeper.

“Confederate monuments, and many other monuments, are frequently discussed solely in terms of their historical subject matter. Often that is appropriate, but there are also examples where art historical expertise could help us understand a monument’s complexity and nuance as a representation, the way their particular iconographies, formal renderings, material handling, and art historical references contribute to their meaning,” Mehring wrote.

Mehring also shared how art historians have always wrestled with political artworks in society and developed different solutions to these issues. She mentioned how, post–World War II, Germany employed a wide range of solutions for how to address its history. The country ultimately preserved concentration camps, erected Holocaust memorials, and conserved or removed East German monuments after 1989.

“Our shared interests…bring historical depth and global perspectives to these issues so pressing in the United States right now,” Mehring told Public Art Dialogue in an interview. “Different cultures can and must learn from one another.”