As we come together again, take time to celebrate. 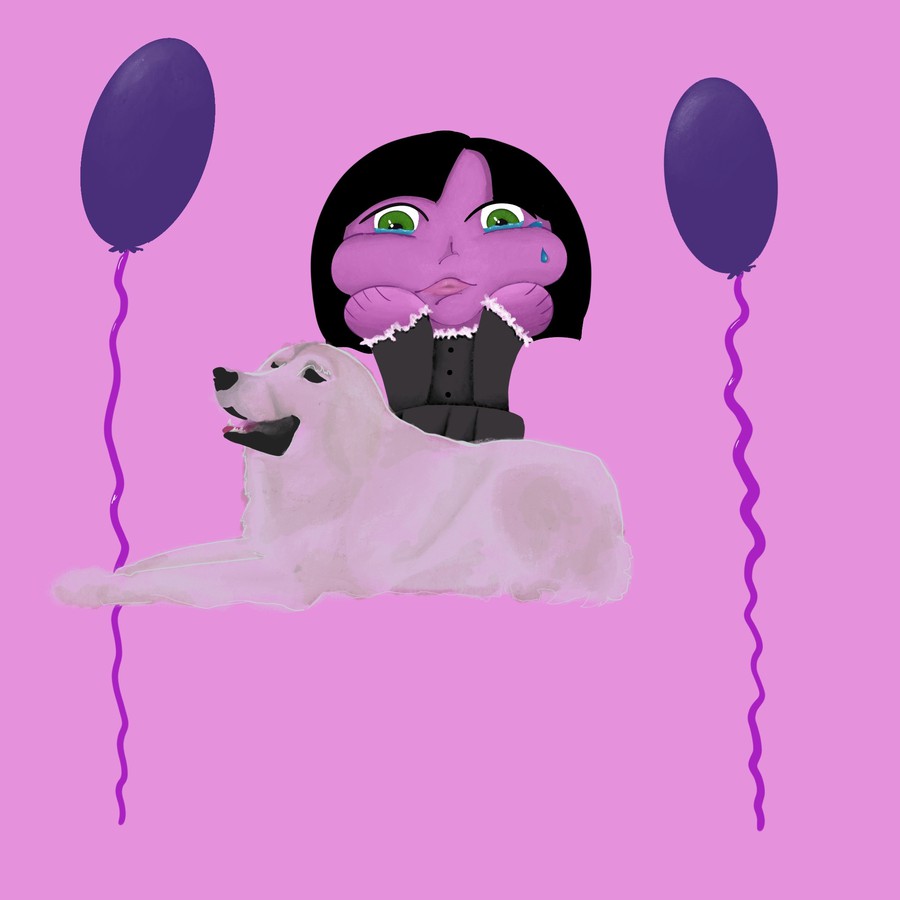 My dog has dick cancer. My mom and I got the call during commencement. We were standing by one of the skinny trees on the quad, waiting for the ceremony to start. Hundreds of people were in attendance: a horde of students, parents, grandparents, and siblings gathered on the green. After a year spent living in a pandemic, the gathering felt sacrilegious. We were all giddy to be amongst people again and not sure how to act. Proud, anxious parents directed their kids: “Stand there, I want a picture! No, honey, move to your left, I want the gargoyle in the background. Smile! Why aren’t you smiling? Don’t make that face…” Grandparents milled about, smiling in the crisp autumn air, younger siblings ran gleefully across the green, and the Class of 2025 waited for their commencement to begin.

Before COVID, ceremonial events like this helped us make sense of our lives. When the pandemic hit, my senior prom and graduation vanished overnight. With them went my chance to say goodbye to classmates and teachers who had profoundly shaped my teen years and helped me figure out who I wanted to be. An entire chapter of my life dissipated, becoming a part of my past without announcement or celebration. Like mist in the morning, my adulthood was simply there one day when I woke up. I swallowed these endings and kept moving, determined to grasp for ceremony wherever I could. As the pandemic shifts and in-person ceremonies become possible again, I implore you to commemorate your life. An event doesn’t have to be as large as graduation for it to be special: You can make a dinner party with friends, a Café 53 date, or a late-night trip to Promontory Point important. As long as you’re making space for yourself to notice where you are and where you want to be, you’re doing it right.

I should note I am not a member of the Class of 2025. I am a transfer student who will spend 10 quarters at UChicago, existing in a limbo between the Class of 2024 and the Class of 2025. I hadn’t gotten an in-person commencement at my previous institution, though, so I was thoroughly excited by the fanfare and celebrations the University had put on. After a year spent indoors, I felt like I was beginning something better and brighter than what 2020 had held.

We heard them first. A high-pitched, imperial sound drifting from our right. We turned to see the bagpipe players, decked in green and red plaid as far as the eye could see, marching in lines towards the center of the quad. Led by a lone policeman on a Segway, they played a stoic tune.

My mom’s phone buzzed. She picked it up. It was our vet. She told us that my beautiful Great Pyrenees dog, Hansel, had a mass in his penis. My mom and I didn’t know at the time that it was slow-growing, and that, given pain medications, he would live a happy three months and counting. What we knew was that he had been peeing blood all week, and we thought he had days to live. As the bagpipe players made their way to the front of the commencement stage, my mother and I burst into tears.

We drove, stunned at the news we had just received, to 57th Street, where I was meeting a friend I knew from home who had agreed to show me the Hyde Park neighborhood. Cars lined the street in tight rows. “I won’t be able to find parking,” my mom said. “Okay,” I told her, “Why don’t I just get out here, then?” I could see my friend waiting outside 57th Street Books. “Alright,” she said, so I got out of the car. She rolled the window down. “Well, I guess I’ll go to the airport now,” she said. “What?!” I replied. Somehow, amid the chaos of commencement and cancer, I had forgotten that her flight home to California was that afternoon. I gave her an awkward hug through the window, and as cars began to honk behind us, I said goodbye. She drove off. I turned around to my friend, loaded with the most emotional baggage I had carried in months, said “Hi,” and immediately began to cry.

And so, my time at the University of Chicago started in an even less conventional way than that first online commencement. Some things were back to normal. In-person classes felt like a sigh of relief after Zoom absorbed the academic world last year. There were parties and performances and plays. Life felt a little more regular, albeit masked and shrouded in a layer of constant COVID-anxiety.

I reveled in the return of college traditions. This was what I had been waiting for: now I could see my friends perform in their a cappella shows and their symphony showcases. Now I could go out to parties, walk the Hyde Park streets with friends, and even spend $30 printing one week’s worth of reading out at the Reg. This was the life I had seen on TV and heard about from older friends.

I longed for tradition during the pandemic. I longed for neatly wrapped experiences, ones that you’ve read about in other people’s books and hope to recreate for yourself. I wished for a wedding, a funeral, a baby shower, a San Francisco tech startup’s going-public party, Grandma’s eightieth where she tells all her grandchildren that she did cocaine in the ’70s with Harrison Ford, something to break the slog of monotony.

I wanted funerals, really. I wanted some experience designed to help me sort through my emotions. I remembered that last October, I was sitting in my dorm room in Massachusetts when I saw an email from my high school. A girl in my grade had died. She had died of cancer. She had been nothing but kind to me, and the end of her life had been painful. A few weeks later, a boy I knew from childhood drove off the fourth floor of a parking garage in Colorado, where he was going to college. He was only a year or two older than I was.

I longed for something to help me make sense of this loss. I longed for a structured experience that would lead me perfectly and cathartically through my grief and drop me on the other side, changed but ultimately all right. I dreamed of perfect funerals, where people cried and held each other and said goodbye in a way that left them feeling loved.

Though my grandmother died before the pandemic, when my family and extended family could have congregated safely to honor her memory, we chose not to have a funeral for her. We had an unofficial memorial service for her three months after she had died. We all stood in a circle in Santa Barbara and released monarch butterflies into the sky. The monarch butterflies came in little white boxes, and I think one of them had died, suffocated in the cardboard. I’m not sure how this business is legal. I’m sure some of my family thought this process was beautiful, but I found it lacking. Where was my catharsis? Where was the part where I got to say goodbye? Why did I have to stand and say, “Look how beautiful, the butterfly moves on, life moves on, it’s all so poetic, don’t you think?” All I wanted to do was wear black and scream into the sky until all of my rage and grief had evaporated out of my body.

Screaming into the sky is not the most socially acceptable coping method, though, so a funeral seems like the next best thing. I’ve never been to one, but I think of them as being places of structure that provide relief to broken people. I won’t know if this idealization is correct until I actually attend one (though I hope I won’t need to in the near future), but these kinds of events, these life markers, are what I missed during the pandemic.

That is why, when we got the call during my college commencement that my beautiful, noble hound was going to die of dick cancer, and my mom had to drop me off with the abruptness of a scared street cat leaping into the shadows, I began to cry. And then I began to laugh. The friend who I was meeting looked at me, eyes wide with concern. “Are you okay?” he asked me. “No,” I said between tears, “No, not really. I just said goodbye to my mom for two months and my dog has dick cancer.”

The day ended up being alright. He showed me around Hyde Park. It was late September, and Chicago was bursting with a last-ditch explosion of life before the cold set in. Grass was growing through cracks in the sidewalk, green vines clung to red brick apartments, and my tears dried as I became acquainted with the city I was to call home for the next three years.

Fast forward a few months, and my geriatric dog is still alive. Yes, he still has cancer. Yes, he’s near the end. Yes, he’s going to die. But he got to have a chunky bone for Christmas. He eats his doggie pain meds with his special food. (We’re spoiling him because he’s going to die.) He’s still smiling his goofy smile and panting through life. I got lucky this time. I didn’t need to say goodbye from across the continent.

To anyone reading this who didn’t get to say goodbye, though, I want to say this: I’ve been there. I see you. I hope that time heals your grief and that you can find some humor in the blunt punches life throws at you. Even if you don’t get the chance to commemorate someone or something important to you, whether that be the passing of a loved one, the death of a beloved pet, the ending of an important chapter in your life, or the beginning of a new one, you can still take a moment to reflect on your emotions. If something significant shifts in your life, whether it be a positive or negative change, take the time to notice it. And please know that my pain-medicated dog is smiling for you.