Untitled (Barbara Kruger Is a Parody of Herself) 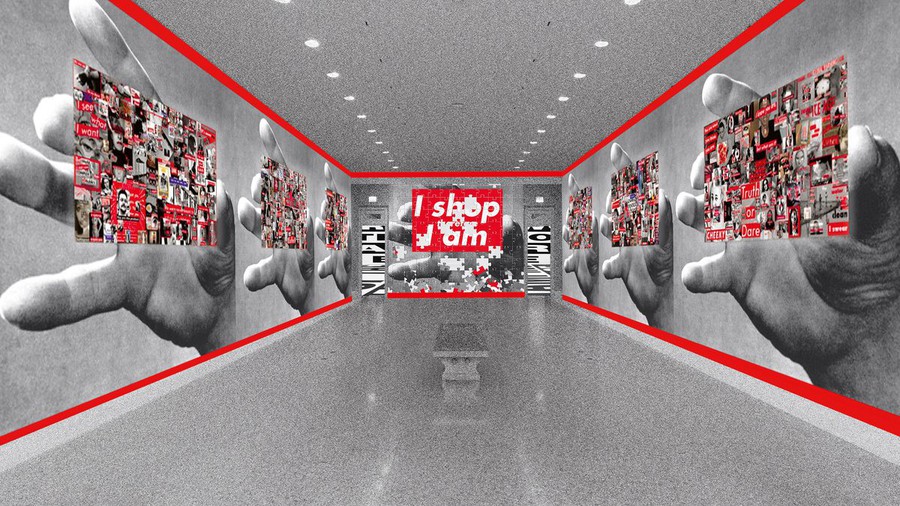 Kruger’s "Untitled (I shop therefore I am)."

It’s difficult to imagine a 75-year-old playing with animation software, manipulating the mouth of a larger-than-life gray cat so that it appears to be speaking the words of Noam Chomsky, and yet, supposedly, here we are.

If you have been existing in Chicago for the past few weeks, Barbara Kruger’s exhibit Thinking of You. I Mean Me. I Mean You. won’t be news to you, even if you’ve never heard the name Barbara Kruger. In fact, Kruger’s white-on-red lettering is so integral to popular culture that odds are you have interacted with it as “a style” rather than the signature of a specific artist.

This explains the tedious familiarity I felt as I made my way through the Regenstein Hall of the Art Institute of Chicago. Kruger’s collages of black-and-white photographs with red-and-white captions hung six feet tall, each loaded with trigger words and recognizable cultural and political imagery, and yet, I found myself thinking, “how…uninspired.” At closer inspection, I realized the irony of my thoughts: Each of Kruger’s collages had references to her appropriation—an exposé on how ripping Kruger off is not just normalized but, from a marketing perspective, encouraged.

Kruger’s art is not about the art itself but rather the consumer’s reaction to the art: The exhibition is in the internal and external response of the viewer. My knee-jerk reaction to blame Kruger for her (seemingly) unrevolutionary creation, rather than investigate the true intellectual proprietor of this aesthetic, is exactly the tendency of modern human nature Kruger wants us to pick up on.

In the early ’60s, lost for purpose after her father’s death, Kruger discovered her passion for poetry: Her love of short-form, compelling literature is not just evident, but fundamental, in her modern work. In the latter half of the decade, Kruger found employment at Condé Nast, a job she emerged from not only as head designer of the publication but also with an idea for a solo venture (her iconic collages) that would launch her into stardom. Kruger’s work in mass media circulation undoubtedly informed her artistic style—many of her pieces are amalgamations of magazine clippings—and I wonder if her first-hand involvement in the mass media industry validates or dissolves the legitimacy of her art and its message.

My friend described Thinking of You. I Mean Me. I Mean You. as a parody of itself: “It can’t possibly be serious; it’s doing everything that it’s criticizing,” he said. Indeed, each major thematic commentary made by Kruger’s art could be ricocheted back onto the exhibit or Kruger herself. For example, Kruger’s condemnation of consumerist culture—note her iconic slogan “I shop, therefore I am”—and the dehumanization it elicits seem weightless once you realize her critical art is being printed on tote bags and T-shirts in the AIC gift shop. If Kruger is so concerned with our becoming a “plastic society”—a society where the individual is defined by their reservoir of material objects which is in turn defined by the individual’s rank in the capitalist hierarchy—then why is she contributing to mass production culture?

Kruger also criticizes the contradictory and haphazard use of language in mass media circulation. Her exhibit features endless walls of text, language in such an overwhelming volume that, despite the violent nature of the vocabulary choices, the words come to mean nothing at all. The museum-goer leaves the exhibit exhausted and disoriented from the abundance (and yet somehow lack) of information, a wonderful simulation of the fast and free communication systems that define the modern world. The issue lies in the fact that Kruger herself is a perpetuator of those systems, having spearheaded design for one of the largest global media conglomerates in the world and, since 1990, dedicating her career to commissioned work for similar institutions.

If Kruger is so aware of the dangers of modern media outlets and the lack of consideration and responsibility they take with their content, then why is she making herself disposable for their success? If Kruger is an anti-narcissist, “a deeply private person” who is repulsed by “contemporary standards of self-exposure,” then why is she the subject of a retrospective gallery exhibit?

The deepest irony of Thinking of You. I Mean Me. I Mean You. stems from the fact that the exhibit isn’t a celebration of Kruger’s work, but a celebration of Kruger herself. The context in which Kruger’s pieces can flourish, the space and time that serves as a vehicle for efficient and concentrated message articulation, is antithetical to a gallery walk of everything from Kruger’s early analogs to her digital modernity. Kruger’s work is most effective when its shock value is fully intact: the Kruger experience is driving along the freeway and locking eyes with a porous Donald Trump stamped with the word “loser.” The double take is what prompts critical thought; the power of Kruger lies in her direct, arrow-like messaging service.

Going to an exhibit specifically to see Kruger already dampens the effect of her work in that it inevitably fosters expectation and standards: The viewer goes in looking for certain things, thereby inhibiting them from being hit by intention. Beyond the preconceived expectations, Kruger’s work has an aesthetic cohesion which means, in lining her art up one after another, any degree of surprise stored within the work deflates.

In fact, pieces that, in the correct external structure, would have caused one to be mentally and physically taken aback, are camouflaged in the homogeneity, acting no more influential than wallpaper. Filling all 18,000 square feet of Regenstein Hall with Kruger memorabilia is not the infrastructure for her artistic success; it’s an opportunity to revive Kruger’s name after twenty-some years of only historical relevance.

The animation art made specifically for Thinking of You. I Mean Me. I Mean You. supports my theory that it prioritizes flash over substance. A cat speaking the words of Noam Chomsky is a viral moment, a means of putting Kruger’s name back, even briefly, into mass circulation; but virality rarely has residual impact and even more scarcely leads to change. Subway cards with probing questions that cause eyebrows to furrow on long train rides are masterful vehicles for Kruger’s analytics—one of many of her innovative installations—meaning Kruger is entirely aware of what her art requires to thrive and is intentionally not providing it. The hypocrisy of Kruger’s anti-narcissist elitism as she deceptively sells tickets to the Barbara Kruger show under the disguise of Thinking of You. I Mean Me. I Mean You. is entirely consistent with the parodic quality of the exhibit.

So where does this leave us? Is Kruger an artistic phony doing the sociological equivalent of performative activism, or is her entire life one tremendous meta-exhibition? I sense it’s the former, though I also acknowledge the significant role she has played and continues to play in the contemporary art scene. Is it unfair of me to expect modern artists to live according to their anthropomorphic findings? Is their responsibility just to expose, analyze, and critique for public consumption? Regardless, here I am engaging in yet another argument about whether Barbara Kruger deserves the time of day, all the while giving her nothing but energy and a platform, so who is the real hypocrite?