The country-rock star stirred up emotions and commanded an astounding presence in an intimate, rollicking Oak Park concert. 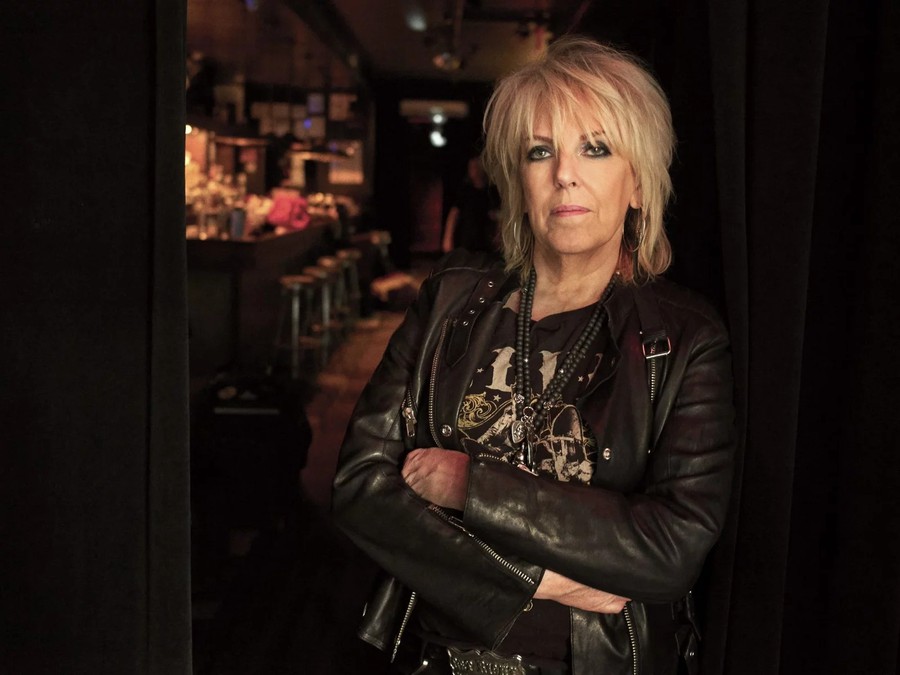 On November 6, 2021, I said that live music had been ruined for me forever. This melodramatic statement came as I walked out of Carnegie Hall, one of the greatest concert venues in the world, after Brandi Carlile, a defining vocalist of her generation, had performed the entirety of Joni Mitchell’s Blue, one of the most influential albums in history. Surely, nothing would ever compare.

I knew that I would see other great concerts, and I have. But I doubted that I would ever witness such a musical performance again, one so transcendent it becomes elemental, even magical. But on April 12, I felt that same elemental energy as Lucinda Williams performed at Unity Temple in Oak Park.

Williams had an itinerant childhood that traversed the American South, Mexico, and Chile, and her work is just as hard to pin down. She bounces between genres, from blues to country, folk to rock. She counts Tom Petty; Audioslave; Sade; and the poetry of her father, Miller Williams, as inspirations. She has covered The Rolling Stones, and Mary Chapin Carpenter has done covers of her songs. She’s a formidable songwriter, insistent on approaching topics of abusive relationships and complex men with a provocative compassion. In surveying her 40-year career, the only unifying thematic force behind her music is a spirituality of sorts. There’s near religiosity in her devotion to the steel guitar and dusty roads and in her veneration of the “beautiful losers,” as she calls them, at the center of her best work.

There could be no better showcase for this musician than the intimate sanctuary Unity Temple, designed by legendary architect Frank Lloyd Wright. As soon as Williams began to sing the opening lines of “World Without Tears” from her 2003 album of the same name, it was clear that it would be a night of emotional resonance and unflinching candor.

The motivation of Williams’s tour is ostensibly to promote her latest release, 2020’s Good Souls Better Angels. That album is overtly political and topical; it’s not too difficult to determine the subject of her stunning and unsparing song “Man Without a Soul.” But after suffering a stroke in November 2020, Williams is using the tour as a career retrospective—even though, at age 69, her voice sounds as good as ever. In fact, I was surprised to find that Williams sounded better today than she did twenty years ago. Emmylou Harris once said that Williams could “sing the chrome off a tailpipe.” Her voice still has its trademark cragginess, but live performance reveals a vocal purity that's obscured on record.

Prior to the show, there was a near-audible buzz of anticipation among the audience, whose members spanned at least six decades in age. The women next to me were in their 70s and seeing Williams for “the fourth or fifth time”; the girl in front of me was celebrating her eleventh birthday and her first-ever concert. If Williams needed a few songs to settle her nerves, so did the crowd in order to loosen up. The enthusiasm and admiration only grew throughout the concert, and, by the time she got to “Drunken Angel”—my favorite of her discography—the audience was on its feet, singing along.

The 19-song setlist pulled from familiar songs, including “Can’t Let Go” from her breakthrough 1998 album Car Wheels on a Gravel Road and deep cuts like “West Memphis” from 2014’s Down Where the Spirit Meets the Bone. In an unconventional move, Williams eschewed her biggest songs, “Passionate Kisses” and “Essence,” in favor of lesser-known but more personal tracks. One such example, “Pineola” off Sweet Old World (1992), provided one of the night’s first showstoppers. Spare and brutal, the song depicts the suicide of a friend, and even 30 years after its initial recording, Williams channeled the tragedy with a fresh potency and beauty. Another unexpected standout was “You Can’t Rule Me” from Good Souls Better Angels. Williams’s performance felt more punk than one would expect of a near septuagenarian.

Her backing band, Buick 6, demonstrated remarkable musicianship and adaptability throughout the night, particularly guitarist Stuart Mathis. Given the stylistic medley of Williams’s music, the group aptly met the demands of each song, from the understated “Big Black Train” to the layered, intricate “Car Wheels on a Gravel Road.”

But it was still Williams who captured and held the spotlight. Williams studded her performance with stories that introduced each song. If her songs are “like reading [her] journal,” as she said, these stories provided the audience with a glimpse into the process that guides one of America’s great songwriters. Her musings spanned the vulnerable to the humorous, occasionally at the same time. In the lead-up to the bittersweet “Lake Charles,” she spoke of one of those “beautiful losers”: Clyde Joseph Woodward III. “With a name like that, it tells you enough about a guy,” she quipped to the crowd’s amusement. “But [he] never could get himself enough together,” she added with startling sadness.

As we entered the concert, the venue manager had warned us that we “may weep.” There were certainly moments that threatened tears, like the aforementioned “Pineola” or the gentle “Bus to Baton Rouge.” But by the time Williams reached the end of her set, the band and audience were rollicking. Playing to the crowd and to the concert space, Williams closed out the concert with a rendition of ZZ Top's “Jesus Just Left Chicago” and her own songs “Blessed”  and “Get Right with God” from 2001’s Essence. And, as they listened to one of the great songwriters of our time, the crowd was moved to dance.

As Williams’s final songs made explicit, there is a reason that the imagery and language of music and spirituality are so tightly intertwined. Plato once called music “the moral law” that “gives soul to the universe.” Thousands of years later, Frank Zappa declared music “the only religion that delivers the goods.” Musicians are elevated to objects of idolatry. Favorite songs transform into personal hymns. Religious sanctuaries become temporary concert venues. Music at its purest provokes ecstasy, a greater force that seeps into our bones and takes hold of our being, if only for a moment. Its artistry and liveliness compel us to take action and to inhabit our feelings in ways few other undertakings can.

Faith is at the heart of nearly all of Williams’s songs. Her music asks us the questions of where we invest our faith, how we sustain it, and what happens when we break it. But she also supplies us with answers if we look hard enough. We can assign faith to the sound of car wheels on a gravel road or Howlin’ Wolf on the radio or whatever else we choose. More than anything, Williams’s music shows us that true faith is found and maintained only in one another.

So it felt fitting that, under Williams’s spell, the night ended with the audience dancing among the pews in a sanctuary.