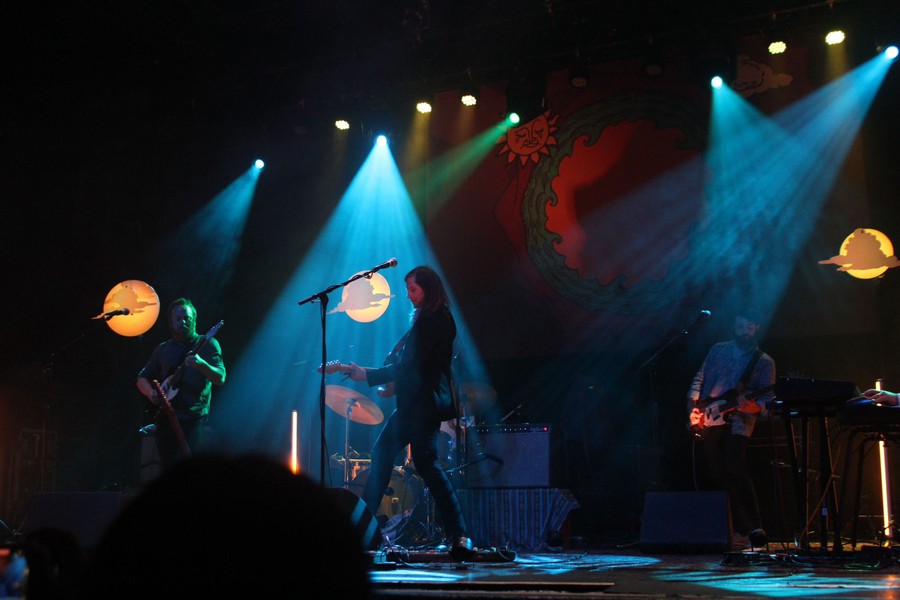 On April 29, Fruit Bats performed in Thalia Hall, contrasting their neon lights with the Gothic architecture in a way that reflected their indie-folk style.

The Fruit Bats have been around since the late ’90s, centered around lead singer-songwriter and only permanent member of the band Eric D. Johnson. On April 29, Fruit Bats performed in Thalia Hall, contrasting their neon lights with the Gothic architecture in a way that reflected their indie-folk style. That night, Frank LoCrasto played the keys, Josh Mease the guitar, and David Dawda the bass, while Josh Adams was on the drums.

Thalia Hall stood out, complementing its neighboring buildings on Chicago’s 18th Street. The sharp steeple and elegant exterior moldings matched the interior’s domed ceiling and the intricate carvings flanking the stage. The Gothic architecture stood at odds with the modern neon lights onstage. The backdrop depicted a circle of waves and mountains; in the top left corner was a sun with a calm face, and in the top right corner a cloud. The stage was dotted with neon clouds, a reference to Fruit Bats’s 2022 album Sometimes a Cloud Is Just a Cloud, a collection of their best songs from the past 20 years.

Johanna Samuels, a budding artist from Los Angeles, opened, performing her sweet indie melodies with a broad smile. Her song’s lyrics are based on personal experience while her instrumental and vocal style are reminiscent of Fruit Bats, whom she cited as an inspiration. The most memorable part of her performance was her banter. She joked with the crowd while tuning her guitar, responding individually to audience members who shouted things like “That’s L.A. for you!”

After Johanna left, the crowd pushed forward in anticipation for Fruit Bats. Eric appeared first, followed by his instrumentalists. His light brown hair flowed over his shoulders, drawing attention to his initials stamped on his leather guitar strap: EDJ. Much like the contradiction between Thalia Hall’s architecture and its neon lights made the space intriguing, the offset between Eric’s warm, passionate stage presence and his heavy brow and dark eyes seemed to reflect the band’s melancholy messaging and sound.

Fruit Bats opened with three of their best songs, setting the tone for the night. They started with “Cazadera,” whose most memorable lyric, “Sometimes a cloud is just a cloud,” was the inspiration for their 2022 album and tour. They moved onto “The Bottom of It,” their most-streamed track on Spotify, an upbeat song with catchy lyrics and verses that build off each other. Eric slowly built up to the chorus of the next song, telling a story of his love for his home, Chicago, in “My Sweet Midwest.” In talking about “Chicagoland,” Eric immediately connected with the audience, establishing a sense of familiarity by joking about his weird apartments in Logan Square and his experience recording music down the street.

The band moved through the bulk of their show with high energy. Eric was constantly in motion, moving with guitar in hand, swinging his hair as he sang. “Homie was hard to photograph,” as Jed Whalen Stewart, taking photos, put it. The band played some of their most memorable tracks: “The Balcony,” “Lingering Love,” and “Absolute Loser,” pulling from numerous albums. They tactically interspersed some lesser-known songs between those that the audience sang along with, performing every number to its full extent.

Eric’s dynamic expressions added to his animated stage presence. He often contorted his face while singing out of the side of his mouth to hit the desired notes and sounds. His range was incredible. While he visibly grew tired throughout the show, he turned his energy back up for the final stretch, the power of his later vocals indistinguishable from that of his opening songs. Towards the end of the performance, it was clear he didn’t want to leave, and he reassured the audience that he would be back for an encore. The band began to close the night with one of their “golden oldies,” as Eric put it: “When You Love Someone.” The song, while beautiful, was subdued, but the energy was turned up for “Shane” before the band walked off the stage with the audience left wanting more.

The cheering began as soon as the band disappeared. After a minute of anticipation, much to the audience’s and Eric's delight, the band returned to their instruments. The audience sang along to the encore, “You’re Too Weird,” a perfect example of the Fruit Bats’s distinctive style and sound. With the opening bars of “Humbug Mountain Song,” heads bobbed to the rhythm, those iconic neon clouds pulsing as Eric brought the show full circle, singing about love and looking up at the sky. His love of Chicago was clear in his melancholy smile as he waved goodbye to the audience for a final time.