This House is Bob Thompson’s 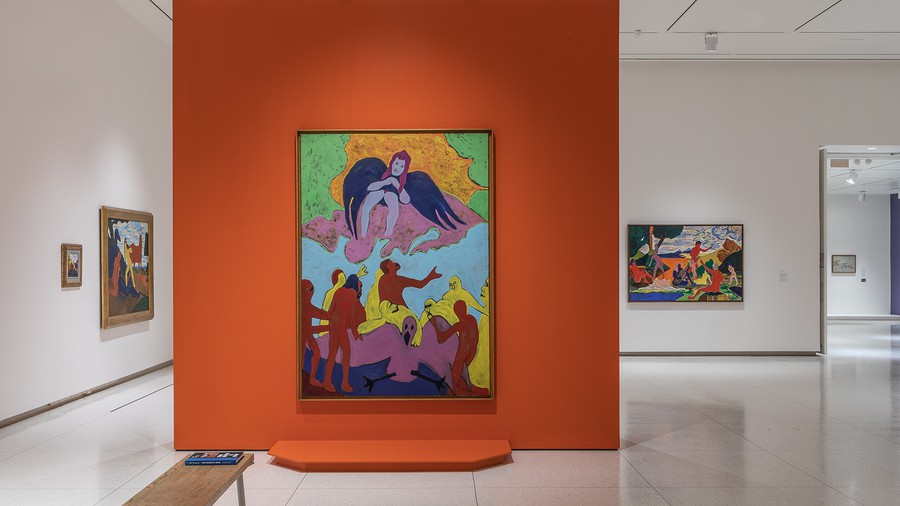 A Review of the Smart Museum’s Newest Exhibit.

The Smart Museum of Art’s newest exhibit, This House is Mine, is a collection of Bob Thompson’s greatest works. It is an awe-inspiring sight, especially since it is Chicago’s first survey of Thompson’s art in over twenty years. The Smart Museum truly made an incredible choice in its design of the exhibit. Sections dedicated to each theme Thompson focused on—his personal life, his reflection of 1960s societal norms, jazz, and his homages to artists such as Poussin and Goya—facilitate a guiding path for one to follow when visiting the museum. Despite my little prior knowledge of Thompson, this guide sparked my interest in his career and the themes he focused on.

Bob Thompson (1937–66) was a Black figurative painter who spent much of his career reworking masterworks of art history. He specifically spent much of his early career making colorful abstract reinterpretations of Nicolas Poussin’s classical Baroque pieces. These pieces are brightly colored and emphasize the shape of bodies, lacking a sense of emotion from the figures. There is an understanding through these pieces that the body is symbolic; the body is all one needs to understand context. It is notable that Thompson was very focused on the work of French artist Nicolas Poussin, his own works drawing upon Renaissance and Antique traditions. Knowing this, it’s clear that Thompson’s work makes a similar statement to that of Poussin’s: “The past is the present.” Thompson’s artwork may depict a scene of Antiquity, but the artist has brought it to us in the present, in a new form with a new meaning. In pieces that once had the context of humankind’s natural beauty, Thompson’s reworkings bring forth themes such as racism, the oversexualization of women, and the hypocritical nature of society.

Alongside the reworkings of old masters, Thompson was inspired by the abstract jazz movements that surrounded him in New York City. In fact, the exhibition has an entire gallery space dedicated to his work on jazz. I enjoyed that the Smart Museum had jazz playing in the background of this part of the exhibition to set the audience in the context of the work. One of my favorites from this section was “Homage to Nina Simone” (1965), which puts Blues singer Nina Simone in an almost classical lens. Like Poussin’s work, the painting is set up in a structure similar to those from the age of antiquity. In the piece, Simone is depicted as a figure from an antique painting.

There were two pieces that stood out to me as an onlooker due to the stories they seem to be telling: “Black Monster” (1959) and “Self-Portrait in the Studio” (1960). The former has four central figures in the composition: two women and a man engaged in a sexually suggestive activity alongside an approaching black monster who is watching. This piece reflects Thompson’s style of abstract forms with seemingly minimal features. The black monster has few features besides eyes and a mouth, resembling a cat looming from the shadows. I noted that the monster’s mouth is wide open as if to swallow the three individuals. According to the descriptive placard at the Smart Museum, the black monster is meant to symbolize the sexuality of Black men. Though the monster is not actively engaging in sexual action, it is still villainized. The portrayal of the monster as an evildoer, despite its not engaging in any inappropriate behavior, frames it as a scapegoat for what is going on in the scene. The sexual action is being performed by someone else, but the individual is pinning the blame on the monster. “Black Monster” references false rape accusations against Black men in 1950s Mississippi that led to lynchings. The piece also references the idea of interracial marriage, which was a matter of controversy in the 1950s. The colors are vibrant and bring light to the piece which is a drastic comparison to the subject matter.

In comparison, “Self-Portrait in the Studio” is a shift from Thompson’s usual brightly colored abstract works. We see Thompson sitting in a chair at his studio, characterized by dark colors and a single, lonely figure. Thompson is slumped down as if sleeping. He is in the forefront of the image, giving us an insider view of his studio. There is something very introspective about this painting. Why is Thompson sitting in the chair at his studio? Are we seeing him at a hard moment in his life, perhaps with little motivation to work? Is he merely relaxing? One is left overflowing with questions after a mere glance.

Overall, the Smart Museum outdid itself with this wonderful exhibition. I recommend a visit in the near future, before the exhibit closes on May 15. For those interested in some of the nitty-gritty details of Thompson’s work, the Smart Museum has a number of interesting video chats which offer symbolic and stylistic insights on the motivation behind Thompson’s work. The resources provided ensure that onlookers are truly engrossed and awe-inspired by the artwork. I think the display was truly one you couldn’t help but feel entranced by.