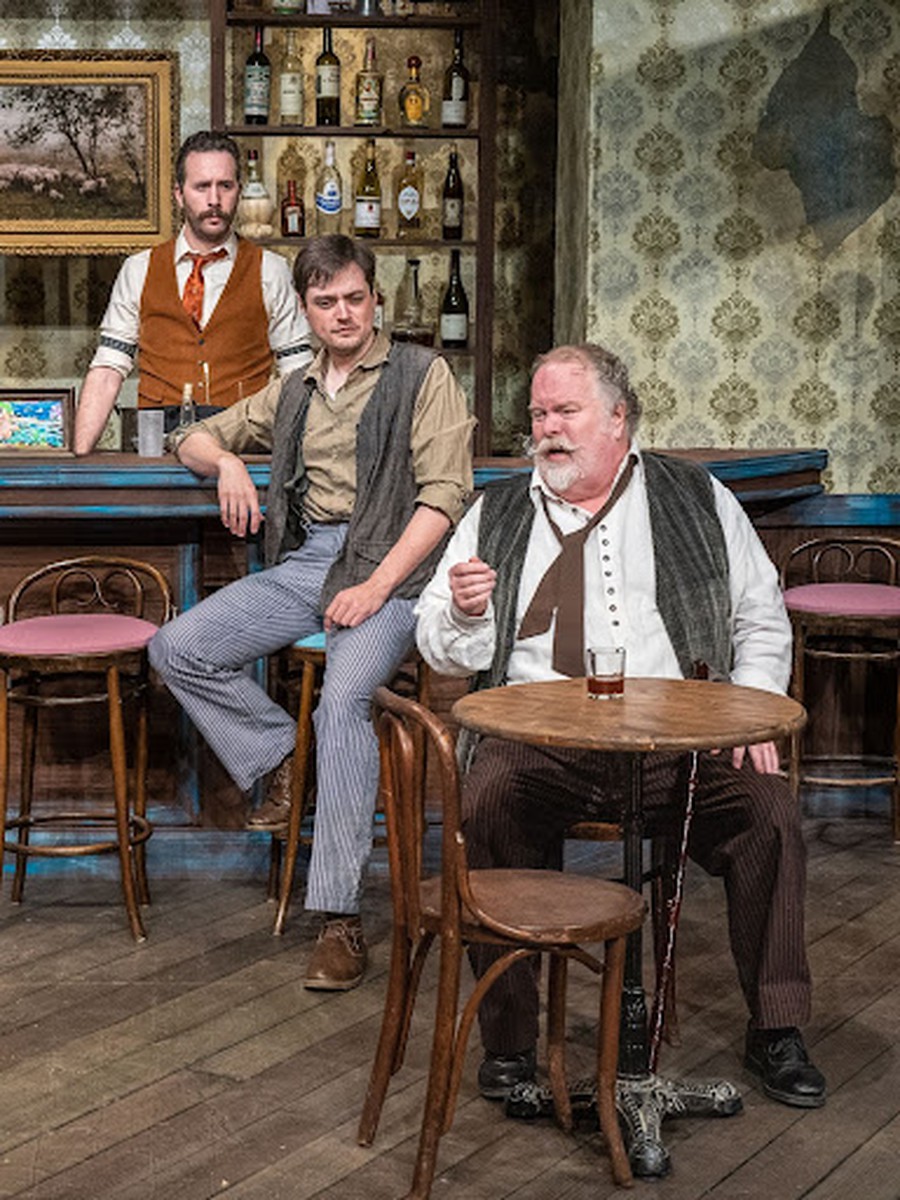 (From left to right) Philip C. Matthews as Freddy, Travis Ascione as Picasso, and Dan Deuel as Gaston in "Picasso at the Lapin Agile."

This April, near Lake Forest, Illinois, Citadel Theatre Company closed its 20th season with Steve Martin’s Picasso at the Lapin Agile. Written by the Steve Martin, Picasso premiered in 1993 at Chicago’s Steppenwolf Studio Theatre. The play imagines a turn-of-the-twentieth-century Paris bar where Pablo Picasso and Albert Einstein meet. Amid interruptions from colorful bar patrons, their discussion explores genius, talent, and intellectualism. At its heart, though, Picasso is a slapstick comedy.

Citadel’s production was rightly defined by laughter. With minimal lighting and sound effects, a realistic set, and few props, the spotlight was on Martin’s wit. Not every joke landed, but that can only be expected when every other line is a punchline. That the play is still humorous almost thirty years after it was written serves as a testament to the playwright’s skill and insight. Martin effectively satirizes art, culture, and romance; in doing so, he also satirizes theater and its conceits.

Martin knows he is writing only semi-omnisciently; he has full knowledge of his characters’ real histories (and therefore futures), but little understanding of their minds. The result is a play full of both dramatic irony and comically oversimplified characters. Mostly, these oversimplifications are strong in concept; they reduce background bar patrons to comedic caricatures so that the stars can shine. However, these minor successes are overshadowed by a major failure: Martin’s oversimplified Picasso and Einstein are at once both one-note and unrecognizable. They are, quite frankly, uninteresting as case studies, a somewhat poor accomplishment considering the concept’s potential. Martin’s humor was bright and clever, but the writing as a whole felt more flat than insightful.

And at play’s end, both playwright and producer let the audience down catastrophically, as Elvis Presley travels back in time, swaying, dancing, and looking nothing like Elvis Presley. To include Presley in the play at all is a bold choice; Picasso meets Einstein would seem sufficient material. Once Elvis is a character, it is incumbent on the actor, director, and designers to convince the audience the character of Elvis is the real Elvis, or at least a manifestation. The trouble with portraying such a well-known individual is that when the portrayal is even slightly off, the audience can tell. With characters such as Picasso and Einstein, all we have is a vague picture, but with Elvis, we know how he talks, walks, dances, sings, and looks. Ian Cummisford’s Elvis felt straight out of an improv show, shattering Martin’s carefully constructed mirage.

It is indeed a well-crafted mirage, despite the faults. The show’s design, unfortunately, did more to complicate than complement the dialogue. Generally, costumes evoked Paris of 1904 and its denizens, but fell short of evoking specific characters and their personalities. And certain costumes—an absurd turquoise top hat and several unnecessarily frilly dresses come to mind—were bizarre and distracting. The show’s simplistic staging felt unconnected, and several characters seemed stilted and wooden, moving very little throughout the course of the play.

Martin has created a complex of dialogue that is elaborate and interlocking, and the actors occasionally tripped on the play’s rough edges. Picasso feels like a radio play or a stand-up bit set on the stage, with characters bantering and through their banter exploring their various relationships to each other. The play works well with the full ensemble present; characters engage each other on stage and the pace stays brisk. But when individuals were tasked with soliloquies and other monologues, they often struggled. Amy Stricker as a waitress was unconvincing in solo scenes, Jake Busse as a roaming “intellectual” verged on annoying, and even Philip C. Matthews (playing a generally intriguing bartender) felt rote when tasked with introspection. In the leading roles, Travis Ascione as Picasso tried valiantly to give vibrancy to a one-note character, but Mark Yacullo as Einstein was utterly forgettable.

There were bright spots in the cast, however. Juliana Liscio, playing a young woman who fancies herself in love with Picasso, was jolly and colorful. Tim Walsh, playing an art dealer, was effective and compelling in his dialogues on painting. And Dan Deuel was excellent as old barfly Gaston. His character—with his frequent urination and rueful romantic life—could easily be interpreted as a mere comedic element. On the contrary, I think Gaston is Picasso at its best: sassy, sarcastic, and satirical.

Citadel Theatre Company’s production of Steve Martin’s Picasso at the Lapin Agile was in Lake Forest, Illinois, through May 22.