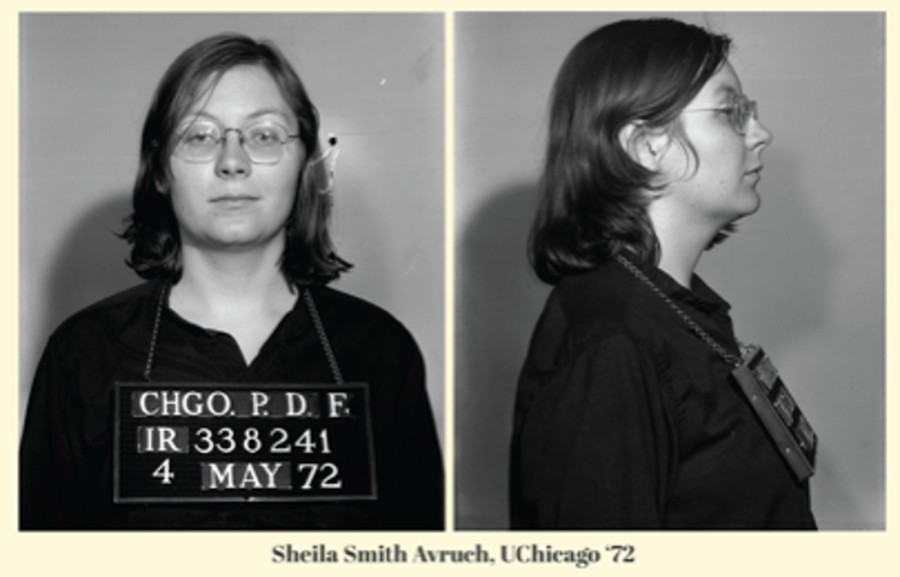 The mugshot of Sheila Smith Avruch (A.B. ’72) from when she was arrested.

Reproductive rights activists convened in the Logan Center on May 21 to discuss the past, present, and future of abortion. Alum Sheila Smith Avruch spoke about the Jane Collective, colloquially referred to as “the Janes,” an underground abortion ring in Hyde Park during the late 1960s and early 1970s. Moderated by human rights professor Susan Gzesh (A.B. ’72), the panel also included Shira Fishbach (A.B. ’17, M.D. ’22), an incoming obstetrics and gynecology resident at the University of Michigan; Bryan Howard, president of Planned Parenthood Arizona; and Ameri Klafeta, director of the Women’s and Reproductive Rights Project for the American Civil Liberties Union (ACLU) of Illinois.

The discussion was part of a series of Alumni Weekend activities and served as a follow-up to a showing of The Janes, a documentary to be released on HBO this June. For the Class of 1972’s 50th reunion, Avruch and many of the Janes returned to speak about their activism and the state of reproductive rights today.

The event was planned before the Supreme Court opinion to overturn Roe v. Wade was leaked, but the news was at the center of the proceedings.

“It’s important for people to understand that the Janes paved the way. They showed courage,” said Christine Malcolm, a member of the Class of 1972 who assisted in organizing the panel, in an interview with The Maroon. “We need to pay attention to the fact that the world is different now but also let people know about the Janes and what they were able to do.”

In 1965, a friend of civil rights activist Heather Booth asked for help finding an abortion for his sister. From then on, Booth, who graduated from the College in 1967, became a resource for people seeking an abortion. In 1969, she formally established the Janes, officially known as the Abortion Counseling Service of Women’s Liberation. Avruch discovered the Janes a year later, during her junior year at the College.

“I wanted to get involved with the issue that affected women’s rights. So it was at the back of my mind [to join the Janes], but I really didn’t know how to get in touch with the group,” Avruch said in an interview with The Maroon.

The Janes originally met Avruch with trepidation in 1971 given that abortion was illegal at the time. However, she continued to attend the underground meetings and eventually won over their trust. Once an official member, Avruch served as a counselor.

“[As a counselor], I would walk [women] through what the experience of the abortion was going to be like so that it wouldn’t be so frightening, what had happened,” she said. “I felt young and somewhat inexperienced compared to some of the women I was counseling because they often were older than me and had children and just had a lot of life experience.”

On the day of the abortion, women would meet at an apartment, often of a UChicago student, called “The Front,” where they waited for a driver to take the woman getting the abortion to “The Place.” At this apartment, the still-anonymous doctor would perform the procedure as described in the counseling session.

However, in 1971, the Janes learned that the doctor was not, as he previously claimed, a licensed practitioner. This served as a crossroad for the Janes: Half of the group decided to leave while the remaining Janes chose to learn how to perform the abortions themselves. This moment served as a sign that the Janes, even as college-aged women, could make a much larger impact.

“I wasn’t as surprised as I probably should have been to learn that the doctor was not licensed. I think I sort of had figured it out,” Avruch said. “I got interested in [performing abortions], and I wanted to learn how to do it.”

On May 4, 1972, Avruch stood in The Front, about to assist with her first Jane-performed abortion, when heavy knocking on the front door rattled the apartment. Just before the police raided the place, Avruch and six other Janes tossed their medical instruments out the window of the high-rise. They were each charged with 11 counts of abortion and conspiracy to commit abortion, which carried a 10-year sentence per count. Luckily for Avruch and the other indicted Janes, Roe was ruled a year later, and their charges were dropped.

Avruch concluded her reflection on her time as a Jane by acknowledging the current climate surrounding abortion and parallels of then versus now. “I think, very soon, women could have fewer rights than they did in 1971,” she said.

Fishbach, the next panelist, expanded on modern attitudes toward abortions. She emphasized that pregnant people today have more options for receiving abortions than they did when the Janes were active. Abortion pills, available to order online, are a common and less invasive form.

“We sometimes joke that UPS is the biggest abortion provider in the country,” Fishbach said.

She predicted that if Roe is overturned, it will be difficult to even learn how to perform abortions, legally or otherwise. “One of the challenges for medical students and physicians is going to be training, especially in certain states with trigger laws,” she said. If Roe is overturned, 13 states across the United States have laws banning abortion that would immediately come into effect.

Howard continued the legal discussion and emphasized that abortion rights have larger implications for women’s rights and human rights in general. He encouraged the audience to get involved politically and prioritize pro-choice candidates.

To close the panel, Klafeta built off Howard’s push for political activism and underscored the need to avoid complacency in places like Illinois, where Governor J. B. Pritzker claims that abortion will be safe. She highlighted that the Illinois Supreme Court is two votes away from a conservative majority.

Malcolm stressed that despite the uncertain outcome of abortion rights, an encouraging message underlay the event. “If we all work together, we can sustain access for women to the reproductive services they deserve.”