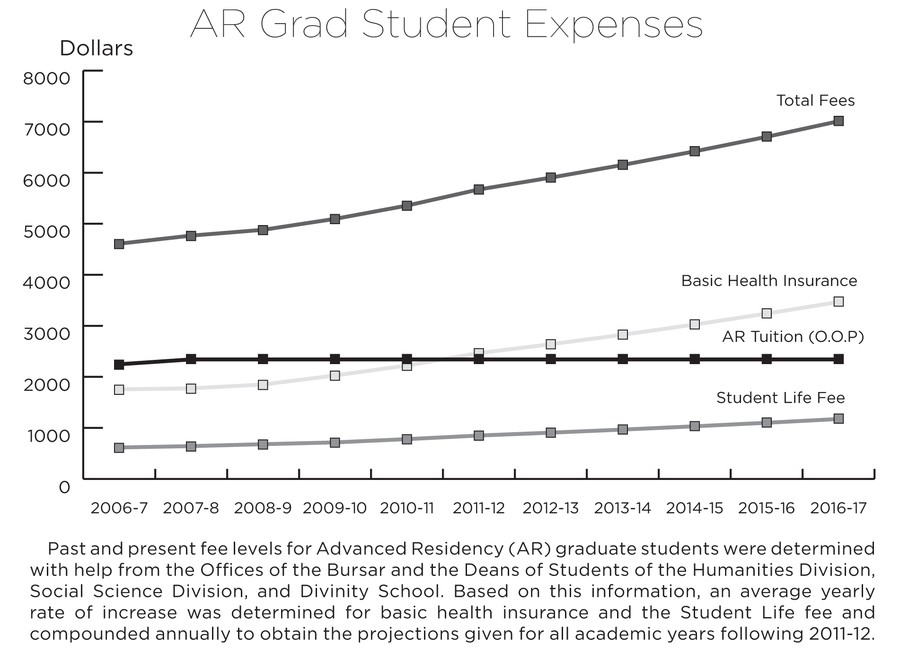 Editor's Note: This article appeared in print in the April 27, 2012 issue of the Maroon with the title "Putting a cap on grad fees."

A recent all-University Committee on Advanced Residence and Time-to-degree convened by Provost Thomas Rosenbaum validated student concerns that high fee levels entail work and loan “burdens” which unnecessarily delay many Ph.D. students in their programs. When the endowment pay-out begins to increase, the Provost should make it his top priority to draw the counterproductively high out-of-pocket Advanced Residency (AR) tuition that many Ph.D. students are required to pay beginning in their sixth year (currently $2,352 per year in the Humanities and Social Science Divisions and the Divinity School) down to a nominal level. If action is not taken, combined fees for these students will likely grow from the current rate of $5,670 to over $7,000 per year by 2016–2017, exacerbating difficulties already faced by poor and vulnerable graduate students.

Out-of-pocket AR tuition was intended to be nominal, but a flat yearly percentage increase unintentionally led to an annual rate of $2,241 by academic year 2006–2007. In that year, widespread student concern led in part to the formation of an all-University Committee, which was chaired by then–Deputy Provost Cathy Cohen and included deans, professors, and students (including myself). Due to the economy, however, the Provost could not follow the committee’s recommendation to lower out-of-pocket AR tuition, though the amount has remained frozen at $2,352 per year since 2007–2008.

Unfortunately, Ph.D. students now face an even greater burden because other fees with less flexibility have continued to rise. Of these expenses, health insurance is the largest, but the student life fee is also sizeable. Since the initial outburst of student concern, the total basic bundle of fees has grown 23.2 percent from $4,602 to $5,670, despite AR out-of-pocket tuition remaining frozen. If basic health insurance and the student life fee continue their average yearly increase, current first year Ph.D. students will encounter $7,013 in fees when they enter their sixth year in 2016–2017—an amount 52.4 percent higher than the $4,602 bundle of fees that students called attention to back in 2006–2007 and that was eventually recognized as entailing counterproductive work and loan “burdens” by the all-University committee.

Exacerbating this greater burden is the fact that many Ph.D. students are being forced into high-interest loans that begin compounding immediately because of the recent federal decision to end subsidized Stafford loans for grad students. At the current rate of 6.8 percent interest on an unsubsidized Stafford loan, loans to cover the projected $5,903 in 2012–2013 fees would start out accruing around $400 per year—and this amount is higher for students who use loan money to live on.

Lowering out-of-pocket AR tuition is the right thing to do, since financially disadvantaged students in AR are the most adversely affected. These students may be in programs with fieldwork or heavy language requirements. They may be parents or suffer from chronic or unexpected illness. Some are international students who cannot afford to stay in the U.S. when they start to face high AR fees. Others are students with little or no access to on-campus teaching positions. Because teaching at the U of C is relatively better-paid and gets an out-of-pocket AR tuition waiver, students who cannot teach are forced into lower-wage jobs but are expected to pay much more in fees. 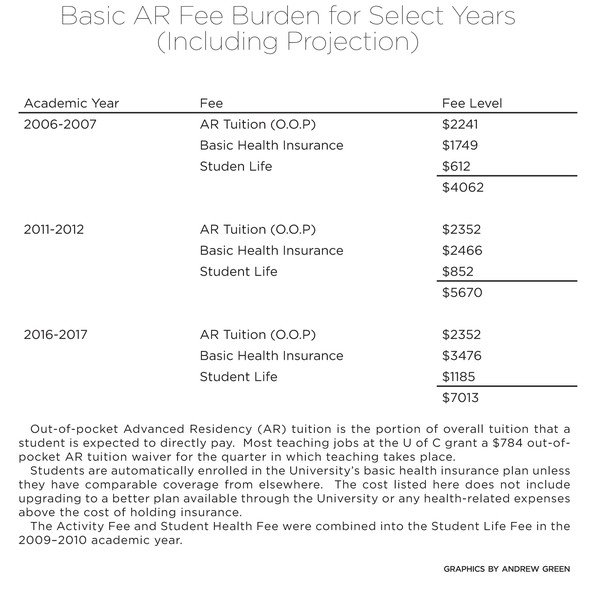 Andrew Green
Drawing down out-of-pocket AR tuition is also the best way to allocate money in order to lower time-to-degree (TTD). Since the launch of the Graduate Aid Initiative (GAI) in 2007, increased stipends and summer funding would no longer have significant effects on TTD. An increase in teaching salaries and the number of competitive fellowships only helps students who can access them—not the poorest students in AR, who are being delayed by the high fees. The efforts of current Deputy Provost Deborah Nelson to frontload language and exam study are very important, but, again, will not help all poor and vulnerable students who find themselves in AR. Increasing cohort sizes after the economy-induced reductions may be important to departments’ intellectual vitality, but this action would actually increase TTD since it increases the number of students who face high AR fees, and more students would compete for the same number of teaching jobs.

The GAI and increased teaching salaries have made the U of C more accessible to poorer students and more competitive with peer institutions, but the bad economy cut short the last major piece of the puzzle: the lowering of the “burden” of fees for students who find themselves in AR through program length or pressing personal circumstances.

All concerned students should contact Provost Rosenbaum, Deputy Provost Deborah Nelson, the deans of their divisions, and their department heads to let them know that the drawing down of out-of-pocket AR tuition back to a nominal level should be the top priority when the endowment payout begins to increase again.

David Mihalyfy is a sixth-year Ph.D. candidate in the Divinity School’s History of Christianity program.