By Pete Grieve    and Adam Thorp

Good morning. It’s tenth week. Finals approach—see our notes at the end of this e-mail.

And if you need something to do to procrastinate, watch second-year Antonio Mestre’s flyover drone footage of campus, published yesterday. (bit.ly/2lQNa68)

The Uncommon Fund announced the projects it will fund this year out of its $30,000 pot. The six projects include the launch of a public policy podcast on campus, a campaign to raise awareness about sexual assault through work with student athletes, and the University of Chicago chapter of a national program that donates leftover food from dining halls to food pantries. The Chicago Maroon’s digitization was also funded; stay tuned for more from us. (bit.ly/2lWcvwk)

We sat down with the South Side Weekly’s editor-in-chief and editor-in-chief-elect to talk about the state of that paper. (bit.ly/2mvO2RB) They talk about their transition, the paper’s decreasing reliance on University of Chicago students and resources, and objectivity in journalism:

“We see our reporting as oriented toward justice. We don’t put objectivity before us as an ideal, but we do have fairness as an ideal. The idea is not to leave a perspective out, but to understand that when you put some perspectives together in a story you’re going to foreground one. It’s just the way that happens.”

Tomorrow College Council revisits plans for a fund to subsidize off-campus excursions made using U-Pass and to establish a committee to help undocumented students. Some background: (bit.ly/2lQs343)

College Council members asked President Robert J. Zimmer last week to meet with them to discuss the University’s policy on freedom of speech in a letter in last Friday’s issue of the Maroon (bit.ly/2mdgYLX). In response, a University spokesperson points out that Zimmer meets regularly with SG’s Executive Committee—but those meetings are not open to the public, or to most members of College Council. (bit.ly/2mdsS8N)

Crime: The CPD reports an instance of criminal sexual misconduct after a young boy was inappropriately touched on the 5100 block of Cornell Avenue in East Hyde Park. (bit.ly/2mz7Xzt)

Jazz at Lincoln Center Orchestra brings a taste of the Big Apple to Symphony Center with a program of Duke Ellington, Mussorgsky and Ravel. (bit.ly/2mdjguI)

Although titled Blur, the Underground Collective performance at the Revival explored the sharpening of memories through song and poetry (bit.ly/2lWnl5D)

Columnist Soulet Ali contends that the University’s refusal to even discuss potential divestment from fossil fuels is unacceptable. Justifying economic secrecy under the guise of the Kalven Report, “the University is feigning neutrality on an issue in which a neutral stance is not possible.” Arguing that the University has more significant goals beyond its commitment to remain apolitical, Ali writes, “the University administration must change its one-sided relationship with the members of its own community in order to stay faithful to its most significant mission: the commitment to enrich and work for the welfare of our society.” (bit.ly/2lWn8iR)

In 2015, Maya Handa received $10,000 from the Uncommon Fund to build a young adult fiction collection at the Reg based on student requests (bit.ly/2lPYZcN). Far and away the best-performing author is Tamora Pierce, the author of the Song of a Lioness series, with almost twenty requests. See the progress she’s made so far and and make more suggestions at the project’s formal launch. Friday, March 10, 6–7 p.m. in Regenstein room 122. See more at chicagomaroon.com/events.

---
Chance the Rapper announced at a press conference yesterday that he’s donating $1 million to Chicago Public Schools as a “call to action” to end the financial crisis. Last month, Hannah Given analyzed how a $46 million CPS spending freeze related to the ongoing crisis is affecting white vs. nonwhite schools. (bit.ly/2moiePm) She attended Chance’s press conference, and sent in this picture. 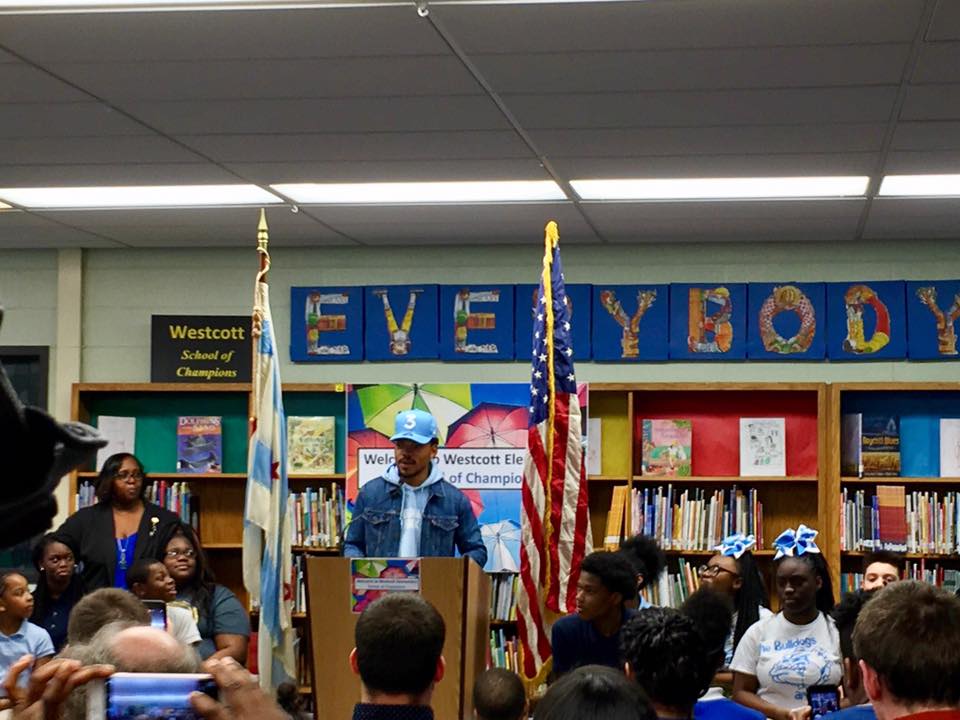 The Gate sits down with Atlantic editor Jeffrey Goldberg (bit.ly/2lWAGus)

A poem from Sliced Bread: Tea and a Shirt. (bit.ly/2mQbn1j)

“It’s a particularly sad irony that people who voted for Trump will potentially end up getting worse medical care because of this”—public policy professor Peter Ganong on Trump’s travel ban, quoted in The Huffington Post. (huff.to/2mQ8Ggh)

---
For Finals Week: the first floor of the Reg will not close Friday or Saturday night—meaning the building will be open uninterrupted from March 5 to March 17 (bit.ly/2lQFmRM). UChicago Arts will again host study opportunities in a variety of exotic locales, including the Oriental Institute and the Smart Museum, through Reading Period and the weekend before finals. (bit.ly/2mvDBgT). Also, study breaks: Samosas (bit.ly/2lyHItq); Purim (bit.ly/2mZYDlO); Comfort food (bit.ly/2lWNJwa); at the Reg (bit.ly/2mQ8YDY); at the Center for College Student Success (bit.ly/2lQWNlv); late night breakfast (bit.ly/2mdDsMN)