By Sophie Downes   and Pete Grieve

Incident report at Harper Cafe: “Theft of currency from cash register - estimated to be approximately $5,000 - reported to have occurred over an extended period of time.” (Reported April 14)

Campus climate: More results from last year’s survey have been released, and the results show that Jewish and Muslim members of the University community report high levels of discrimination and harassment. The Director of Spiritual Life told us that they often hear about these issues from members of the Muslim and Jewish communities.

Very UChicago: History professor Ada Palmer’s debut science fiction novel Too Like the Lightning is receiving critical acclaim, so we interviewed her: “I was inspired by reading pre-modern science fiction, which I do as a historian. … So I wanted to write science fiction that used the amazingly sophisticated vocabulary of modern science fiction, all the great developments we've had in terms of thinking about AI and flying cars but to ask questions like Voltaire would.”

New admissions application: UChicago was one of more than 90 schools to accept the Coalition Application—an alternative to the Common App—for the first time this application cycle. The University of Chicago isn’t releasing its admissions data until the fall, but a Yale Daily News story may allow for some extrapolation about the pilot program:

A valiant effort: An applicant spoofed The Clash’s “Should I Stay or Should I Go” to try to get off the waitlist…

Update: The Seminary Co-Op held a town hall meeting for members and shareholders Thursday. The meeting to discuss turning the store into a nonprofit—with voting open only to shareholders—will be held in December.

Innovation Fund finalists: The UChicago Innovation Fund selected the five startups that will move on to the final round of judging in May. Among the projects seeking funding: new cancer treatment devices, drugs to prevent food allergies, and technology for improving disease diagnoses.

WSJ → NYT: Op-ed columnist Bret Stephens (A.B. ’95) is leaving The Wall Street Journal for The New York Times. The addition of Stephens means that two of the three conservative columnists at The Times will be alums of the College—the other is David Brooks (A.B. ’83).

——
IN ARTS
Rebecca Julie writes in:

UT/TAPS's New Work Week is a two-weekend debut of student works. Hamilton debuted in a similar reading festival—could the next Broadway hit have graced Logan this weekend?

In addition to being an award-winning a cappella group, UChicago's Voices in Your Head is more a family than anything else (albeit one that has performed in the White House).

It's a busy week for arts on campus: from film screenings and orchestral performance to roundtable discussions and an opera about Walt Disney, there's something for everyone. See what’s happening in this week’s Exhibit [A]rts.

——
IN VIEWPOINTS
Cole Martin writes in:

Counterpoint on D.C. statehood: After columnist Fred Kardos argued that statehood for D.C. is politically infeasible and thus not worth pursuing, former Maroon deputy editor-in-chief Sarah Manhardt writes in to argue that D.C. must fight for political representation now rather than later.

Letter to the Editor: Contributor Rajiv Hurhangee describes the newly revealed horrors of Chechnya's gay concentration camps and provides a helpful toolkit for what the campus community can do to help.

——
IN SPORTS
Cavell Means writes in:

Major League Baseball: The Cubs and White Sox opened their seasons with similar records but with completely different outlooks and expectations for the season.

Men’s Tennis: The Maroons faced turbulent weather over the weekend while facing rival Wash U.

Softball: The team went a neutral 1–1 in a doubleheader against North Central this weekend.

——
The Uncommon Fund sponsored a project to buy T-shirts for varsity athletes supporting the “It’s On Us” campaign to combat sexual violence. Athletes wore their shirts around campus yesterday for the campaign’s “Student-Athlete National Day of Action.” 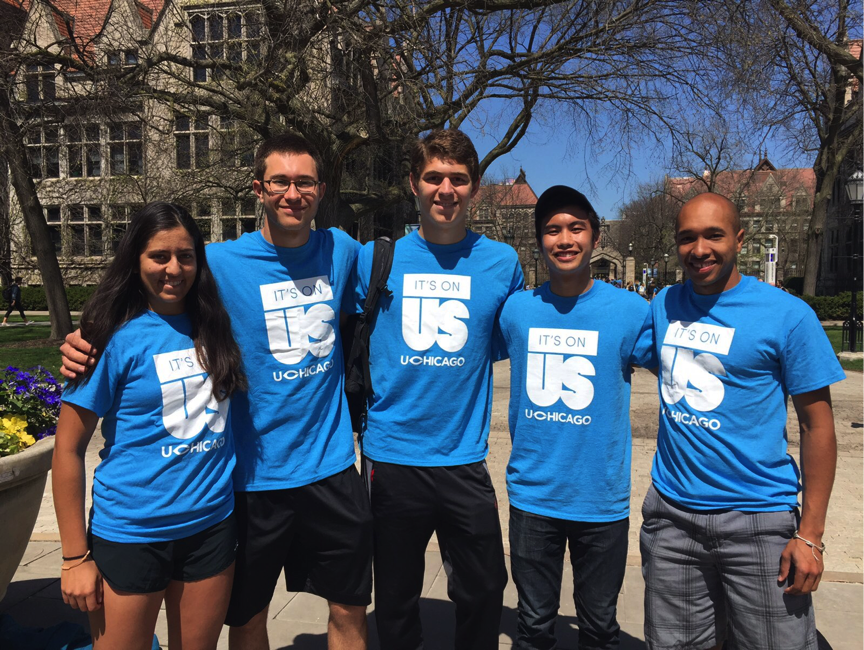 By Pete Grieve and Sophie Downes