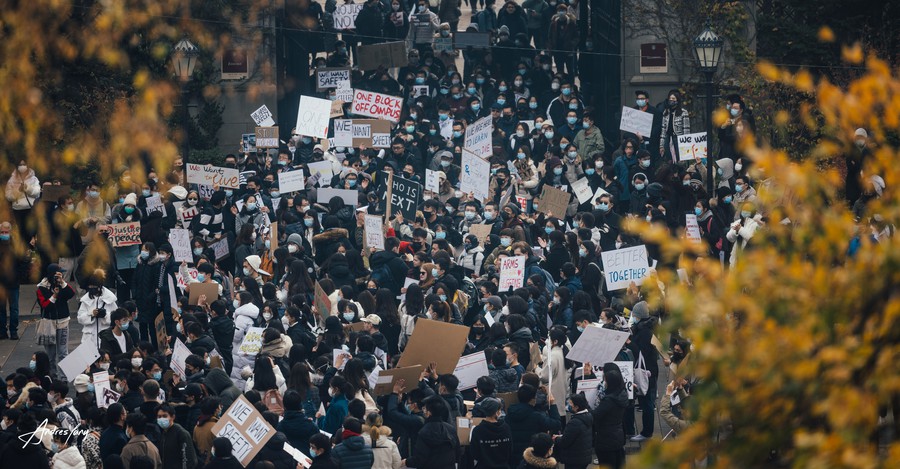 Over 300 students, faculty, and community members participated in a rally held on Tuesday, November 16, one week after the shooting death of Shaoxiong "Dennis" Zheng.

Over 300 University of Chicago students, alumni, faculty, and community members gathered on the main quad on Tuesday for a rally with the slogan, “we are here to learn, not to die.” The rally, organized by over 40 students, demanded the University implement certain measures to increase safety and security, following the shooting death of Shaoxiong “Dennis” Zheng a week ago.

Zheng, a 24-year-old from Sichuan, China, graduated from the University with a master’s degree in statistics last summer. He was shot and killed near 54th Place and Ellis Avenue on November 9 during an armed robbery.

Prior to the rally, one organizer met with the Dean-on-Call, who waived the permit requirement generally applicable to student activities on the main quad because of time constraints. During the rally, several University of Chicago Police Department (UCPD) officers were on call on the main quad to facilitate the flow of traffic. When the group marched toward Regenstein Library on 57th Street, UCPD temporarily blocked the traffic and street. 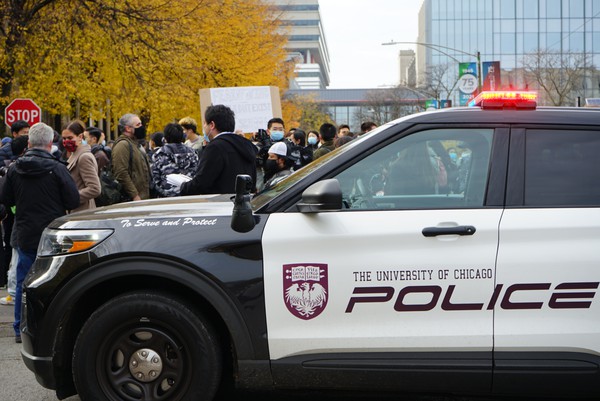 The organizers raised seven demands at the rally following a series of speeches by volunteers. The demands were also distributed to participants on flyers. These demands included more Lyft passes and shuttle routes, real-time security alerts and training, life insurance for all university members, and “off-campus protections.” One organizer who attended the MA Program in Social Science (MAPSS) said that by “off-campus protections,” they mean a “holistic plan of action” that takes into account input from the student body and local community and enhances the “transparency, fairness, and practicality of the University’s existing security asset.”

They also advocated regular updates from UCPD regarding investigations of security incidents. The organizers did not officially demand enlarging police borders, increasing UCPD presence, or installing additional surveillance cameras in the neighborhood, though these actions were called for by some signs and speakers at the rally.

The MAPSS student explained the reason that they opted against demands related to policing. “We are aware that policing is a complicated issue in the U.S. and reflecting on the University’s security policy on a more practical ground is necessary instead of just proposing more surveillance cameras,” he said. In the planning process, the student said that the organizers received many comments about issues of systemic racism within the police system and ultimately decided to avoid demanding increased policing out of deference to these concerns.

Organizers distributed signs to participants bearing slogans like “third student,” “one block off campus,” and “arms for hugs.” Some signs—such as “no justice, no peace”—echoed popular messages in nationwide Black Lives Matter protests. Participants also brought their own signs with different slogans; for example, history student Henry Cheng made signs saying that the safety of the university community must also include #BanAllGuns, #BlackLivesMatter, and #WeNeedCareNotCops. 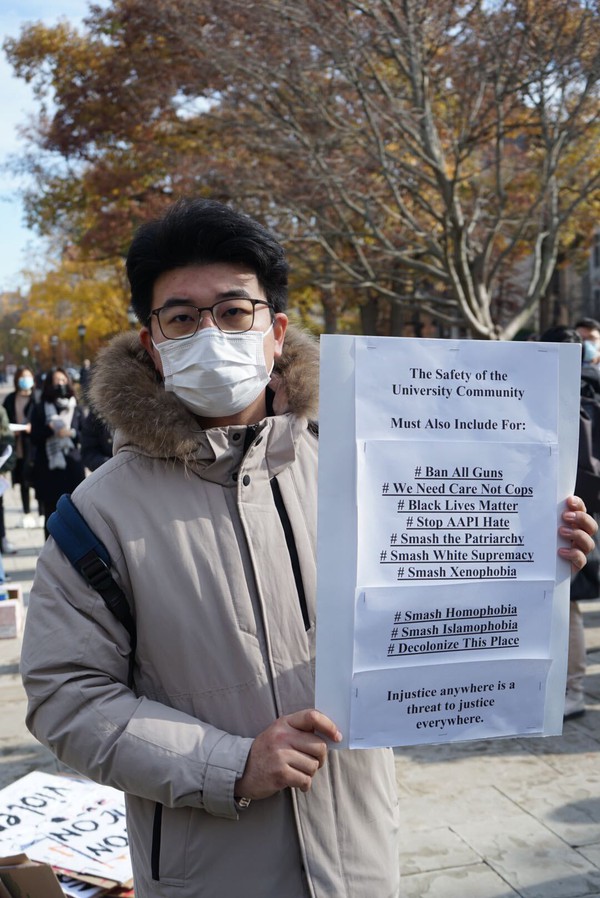 The demands were finalized after discussing over 30 suggestions received through a form that was initially distributed within a group on WeChat formed after the news of Zheng’s murder came out and consisted of international students who were concerned about campus safety. The group then shared the form with their networks.

The MAPSS student emphasized that the discussion was not only open to international students, although international students helmed the rally effort. The “here to learn, not to die” theme was established based on submissions and conversations beyond the organizers themselves. “It reflects the fact that we are here to study and research, instead of risking our lives,” he said. 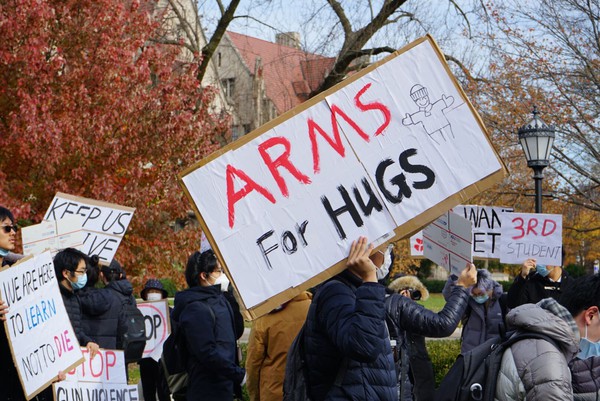 Rally goers held signs made by the event’s organizers.

Volunteer speakers expressed fear and concern about their safety while studying and living on- and off-campus.

“Every time when I walk past a car…I am afraid that someone would get out of the car and stab me and shoot me in my head, and I run,” second-year Katherine Zhao said about her mindset after the fatal shooting of Zheng last Tuesday. “I believe that the unsafety on campus is breaking the trust between people. It’s depriving me of the ability to believe in the people.” At the end of her speech, Zhao urged the University to take action so that students at UChicago would not be “living in nightmares” anymore.

Many other students at the rally emphasized that they came to UChicago for its academic prestige but questioned those decisions amid recent incidents. Junjie Xia, a first-year graduate student in the chemistry department, told The Maroon that some of his friends decided against attending UChicago because of the safety incidents. Iris Xiao, a master’s student in public policy and one of the rally organizers, said that her mother suggested she transfer schools, saying, “a diploma is not as important as your life.”

Longer-term residents in attendance recounted how they had become increasingly concerned over safety. Qun Ba, a senior research technician in the University’s biological sciences department, told The Maroon that she has lived in Hyde Park for 30 years with her family and has observed the safety conditions in Hyde Park getting worse. Retired lab technical director Ling-Jia Wang, who has lived in the neighborhood for 25 years, said she believes there isn’t much the University or residents can do because gun violence is a major issue with the City.

“I just want to express my feeling and support to the community,” she said. “But I feel hopeless.”

However, the crowd had differing opinions on how UChicago should confront violence.

Some individual speakers who volunteered to address the crowd called for an increase in security guards and police presence. “They need to stop being afraid of increased police protection. Supporting UCPD will save lives in the future,” said one speaker whose identity The Maroon could not confirm.

The demands for enhanced security and surveillance cameras align with a public letter signed by over 300 faculty members, which was distributed on social media on Monday. The letter called for the expansion of UCPD’s jurisdiction and increased surveillance and security guards in Hyde Park, among other recommendations.

Siqi, a student at the University who did not give her last name to The Maroon, said that she was not satisfied with the University’s response to Zheng’s death. After the shooting of Yiran Fan in January and Max Solomon Lewis in July, she said the University should have increased the security presence on campus and have more police patrolling Hyde Park. In addition, she said that it was “irresponsible” of the University to describe the location of the incident as “off-campus” in their email informing community members of the incident.

Many others at the rally noted that more long-term solutions are needed and that increased surveillance would not address the root cause of an “economically-motivated” crime. “A lot of [these incidents] result from the glaring inequalities between the Hyde Park community and the surrounding communities that have been exacerbated and perpetuated by the University and its practices of displacement,” one speaker said.

Hang Wu, a 30-year-old Ph.D. student in the joint program in Cinema and Media Studies and East Asian Languages and Civilizations, urged University community members to empathize with others who live on the South Side. “We have to stand with other ethnic groups and all the people who are suffering from this feeling of fear and unsafety,” she said in her speech at the rally. On a sign she made, she wrote, “build a better —more inclusive—Chicago South Side.” 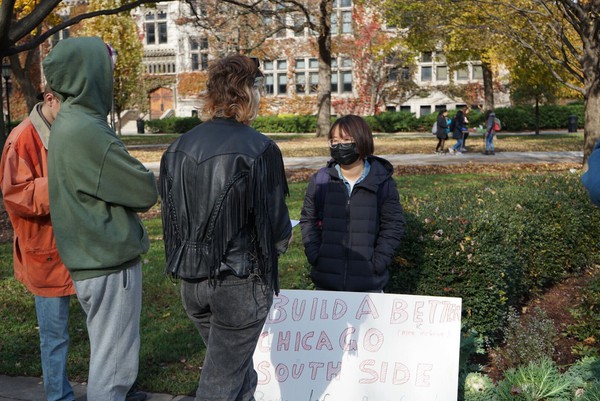 Hang Wu, a Ph.D. student in the Department of Cinema and Media Studies, explained her signs to passersby.

Other rally speakers said that both long-term and short-term measures are needed. “I heard many of you saying that, well, there are long-term measures that we should do, but our problem is imminent.” Da Teng, a 23-year-old Ph.D. student in Chemistry said. “The next one to be shot could be anyone in this crowd,” he said.